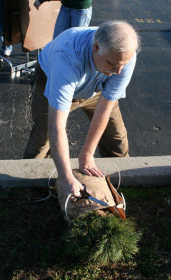 Greencastle High School Science teacher John Garner prepared some of the 1,000 trees that were given away to anyone in the community a few weeks ago. The event was sponsored the school's Environmental Science Club and Pike Lumber.

Caring about the planet Earth is on the agenda this week as Earth Day was Wednesday and National Arbor Day comes Friday.

Earth Day 2009 marks the beginning of The Green Generation Campaign that will be the focus of the 40th Anniversary of Earth Day in 2010.

It also includes an individual commitment to responsible, sustainable consumption and the creation of a new green economy to lift people out of poverty by creating millions of quality green jobs and transforming the global education system into a green one.

Locally, several events sponsored by DePauw University are going on during Earth Week. These have included a cleanup at Big Walnut Creek at the DePauw Nature Park on Wednesday. An interfaith service also took place in the Nature Park's Amphitheater.

From 9 a.m. to 12:30 p.m. today on the lawn outside the Hub (at the Union Building) will be a bottled versus tap water event. At 4:30 p.m., a student produced documentary about the destruction of a sacred river will be in the Watson Forum and on Friday from 9 to 11:30 a.m. 60 white pine trees will be planted with Greencastle Middle School students.

The Greencastle Parks and Recreation Department in conjunction with the DePauw Environmental Club are also sponsoring events for the community.

On Wednesday, there was the "Recycling Races" and teams can compete to see who can sort materials into appropriate categories.

Today, it will be the "Earth Art Contest" where artists can submit works of art created entirely from items occurring naturally. This program will take place at City Hall from 4 to 6 p.m.

Lastly, on Friday, in recognition of National Alternative Transportation Day, the Parks and Recreation Department as well as DePauw Environmental Club would like to invite everybody to ride their bikes and walk if possible as an alternative to using cars.

For more information on this program, contact Parks and Recreation Director Rod Weinschenk at 653-3395 or rweinschenk@cityofgreencastle.com

The first Arbor Day took place on April 10, 1872 in Nebraska. It was the brainchild of Julius Sterling Morton, a Nebraska journalist and politician who was originally from Michigan.

Throughout his life, Morton worked to improve agricultural techniques in his adopted state and throughout the United States when he served as President Grover Cleveland's Secretary of Agriculture. But his most important legacy is Arbor Day.

Morton knew Nebraska's landscape and economy would benefit from the wide-scale planting of trees. He planted orchards, shade trees and windbreaks on his own farm and urged his neighbors to do the same.

As a member of Nebraska's state board of agriculture, he proposed that a special day be dedicated to tree planting and increasing awareness of the importance of trees.

In the years that followed the Arbor Day idea spread to Kansas, Tennessee, Minnesota and Ohio. Today all 50 states celebrate Arbor Day although the dates may vary according to climate.

In 1970, President Richard Nixon proclaimed the last Friday in April as National Arbor Day. It is also celebrated in other countries including Australia, Japan, Israel, Korea, Yugoslavia, Iceland and India.

Arbor day is a nationally celebrated observance encouraging tree planting and care. While the local community will observe the day by planting trees some organizations like the Greencastle High School Environmental Club make contributions throughout the year.

The project was part of GHS's "One School, One Book" program. Earlier in the year, students read "From the Bottom Up: One Man's Crusade to Clean America's Rivers" by Chad Pregracke.

This same group participated last week in a clean-up day at Big Walnut Creek and plan a canoe trip down the creek this summer to continue their cleanup efforts.

According to Cheyanne Maddox, co-president of the school's club during Earth week the club handed out raffle tickets to those who recycled their cans and bottles during lunch. Earth-friendly prizes will be given out to the names drawn.

Bainbridge Elementary first graders will be planting a tree Friday at 1:30 p.m. at the school.

They have been working as a unit on taking care of the Earth and recently took a field trip to a nature park and landfill last week. They have also had special outside presenters talking about soil conservation and the rain forest and are doing recycling art projects.