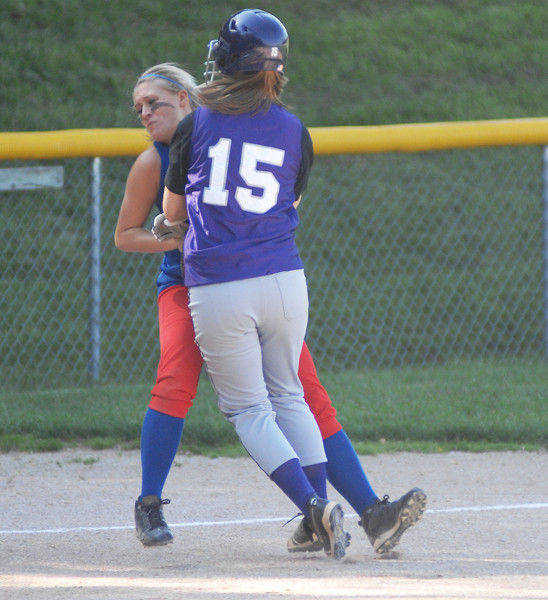 Mallory Miller collides with Megan Barnes of South Putnam at third base Tuesday night at Greencastle. Barnes held onto the ball for the out.

When Chris Jones was asked what was the difference between his Lady Eagles barly beating Greencastle, 2-1, Monday and beating them 11-0 Tuesday? He had only on thing to say -- momentum.

The class 2a No. 5 ranked South Putnam softball team didn't wait until the last inning Tuesday to score a run; they started in the first and scored every inning after that. In fact they scored two or more runs in every inning except the fourth. Oceaia Boetjer had the first RBI of the night when she plated Emily Dabkowski with a single. Then Katelyn Sibbitt brought in Boetjer with a sac-fly to shortstop, giving the South Putnam a 2-0 lead.

The Lady Eagles continued to pound the ball in the second frame, knocking out two home runs and scoring four more runs. Jenny Thompson cranked the first one over the left field fence for a solo home run. Then Oceaia Boetjer singled, scoring Megan Barnes, who reached on an error earlier and then was plated when her sister, Brooke Boetjer, sent one of Mallory Miller's pitches sailing over the fence. After two innings the Eagles led 6-0.

For Greencastle, Tuesday's loss was just another low in its already roller coaster season.

"As far as the season goes, it has been up and down and its nice to get glimpses of what we are capable of like we did on Monday and in time we should b able to play like all the time," GHS Coach Robin Knap said. "We have been struggling mentally and physically all season and hopefully by sectional time we start clicking the way we should."

Greencastle nearly ended South Putnam's winning streak Monday night when it took a 1-0 lead in the first inning, but the Lady Eagles battled back in the bottom of the seventh. After Sibbitt doubled and then later scored on a passed ball, Megan Barnes, who went 2-for-3, drove in the winning run, keeping South Putnam perfect for the season.

South Putnam is now 15-0 on the season and is back in action Saturday when the take on North Putnam in game two of Putnam County softball tournament at Greencastle. Game one starts at 10 a.m. with game two following 45 minutes later

Next Game -- South Putnam is now 15-0 on the season and is back in action Saturday when the take on North Putnam in game two of Putnam County softball tournament at Greencastle. Game one starts at 10 a.m. with game two following 45 minutes later