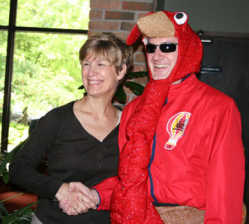 Blake Schowe, General Transportation Manager at Wal-Mart Distribution, was caught in his turkey suit being driven around Greencastle by Melissa Shepard prior to a meeting with Greencastle Mayor Sue Murray Thursday morning.

Schowe was kicking off the his office's campaign to raise money for the Children's Miracle Network. He told his fellow workers at the distribution center if they could raise $300 in 24 hours, he would dress in his turkey suit to talk with the Mayor.

The staff not only met his challenge in 18 hours, but they raised $400.

Their goal is to raise $1,500 by June 15. If they accomplish this, Schowe and several other managers will be riding in costume in the Putnam County 4-H Fair parade in July.

"We have plenty of great costumes, including a leprechaun, pink bunny and heavyweight wrestling ones. I think we'll make the goal," stated Schowe. "We'll do whatever we have to in order to raise money for the Children's Miracle Network."

Anyone who would like to donate to the cause or to purchase a CMN pin for $5 can contact Schowe or any manager at Wal-Mart Transportation at 658-2080.