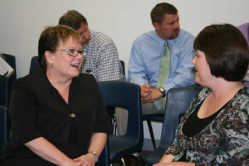 Lovejoy is leaving her position as assistant superintendent for curriculum and instruction for Monroe County Schools in Bloomington.

A 20-year Danville resident, she taught elementary and high school students in Avon and also worked in Brownsburg before going to Bloomington.

North Putnam school board members are delighted to have Lovejoy. She was chosen from a field of eight candidates that was narrowed down to four.

"She is just top notch," said board member Carl Blau. "We are very lucky to get her."

Lovejoy will begin her stint at North Putnam beginning July 1. She is replacing Superintendent Murray Pride, who is retiring after 15 years at North Putnam.