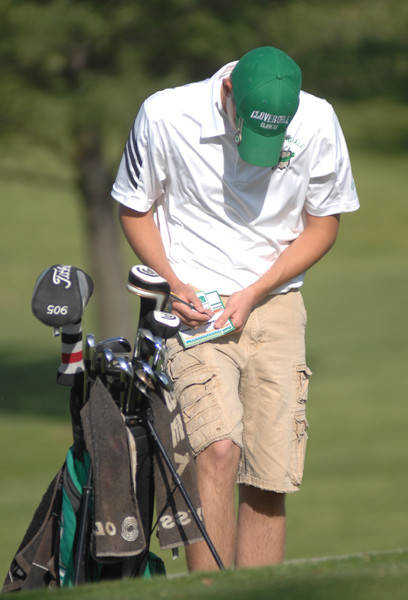 Cloverdale's Chris Arnold writes down his score before he tee's off on the next hole. Arnold carded a two-over-par 74 Thursday.

CLOVERDALE -- With the sectional less than a week away, area golfers are putting the finishing touches on their swings and for Greencastle, things couldn't be looking any better.

The Tiger Cubs cruised by the Clovers, 318-328 on Thursday at the Clover Meadows golf course with Wade Huber and Luke Crimmins leading the charge with a 78 each. Huber and Crimmins had the best scores for Greencastle, but they weren't the best on the day. That honor went to Chris Arnold of Cloverdale. Arnold finished the day with a 2-over-par 74 and that was with him struggling in the beginning.

"Chris had some difficulties on the front nine, but was one-under on the back nine," CHS Coach Doug Wokoun said. "He had a really good round to finish the regular season."

GHS Coach Donovan Wheeler was just as impressed as Wokoun was.

"Hats off to Chris Arnold," Wheeler said. "That was a spectacular round from a fantastic golfer.

"But more importantly, Chris is a great personal young man and he did more than play well -- he represented the county well," Wheeler added.

Outside of Huber and Crimmins, Greencastle had some good shooting from Brad Haussin and Jimmy Wheeler. Haussin carded an 80 at the end of the day, while Wheeler was two strokes behind him with an 82. Tyler Hopkins and Raymond Stinson rounded out Greencastle's scorecard with an 86 each.

Arnold was Cloverdale's only bright moment of the day. Mike Wellington turned in the second lowest score on the team at 86

"Our other players had good holes and poor holes, and we are still having consistency problems," Wokoun said. "We have some things to work on to get ready for Monday."

Even though Greencastle beat his team, Wokoun couldn't help but acknowledge the talent that the Tiger Cubs were showing.

"Greencastle got very good efforts from all their top six," Wokoun said. "Coach Wheeler has done a great job with and they are playing pretty good golf right now.

"They have made themselves into solid contenders for the sectional," Wokoun added.

For Wheeler, Thursday was the end of the best regular season that he has ever coached.

"52-8," Wheeler said. "I have never been part of a team that has had that kind of success, and that includes with a Warsaw team in the 90s that went to state.

"This was a great, great regular season, and I am going to remember this one for the rest of my life and relive it for many days to come," Wheeler added.

Cloverdale and Greencastle are back in action on Monday when they take part in the Martinsville Sectional.

Next Match -- Both teams play in the Martinsville Sectional on Monday.