SummerFest 2009 a success despite long odds 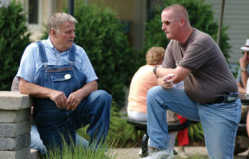 ROACHDALE -- The Roachdale PRIDE Initiative knows how true the phrase "It takes a village," really is. Less than a month ago, the group faced what seemed like insurmountable odds to make their SummerFest event happen.

Because of street closings and a detour through the downtown area, no streets could be closed for SummerFest being planned for July 3 and 4.

After several weeks of searching for a safe location, TDS Telecommunications Corp, jumped in to help the community by generously providing their employee parking lot located near the Veterans of Foreign Wars post.

Later, Nick Ruskowski, TDS Regional Market Manager, informed PRIDE that TDS would help in sponsoring the event with a gift of $500.

Additional sponsorships were sought to support the event. PRIDE donated $500 earned from a barbecue held during the 2008 Fall Garage Sale Days.

This financial base offset the costs of the children's amusements and insurance for the event.

Numerous community members organized events for the two-day hometown gathering. As the originators of a summer Fish Fry, VFW Post #3284 served meals and held a gas card raffle both days. They also provided entertainment by Nashville Connection on Friday evening.

The PRIDE Initiative enlisted the help of community members to hold additional events. The Stephen Edwards family organized and ran the Roach Race gaining knowledge from Larry Kersey and Don Steward on what needed to be done.

While rain soaked the event on its second day, all events were still held. Delta Theta Tau offered biscuits and sausage gravy and baked items. The Bruce Harbison family conducted a Pedal Tractor Pull for children aged eight and under with 13 children participating as the bystanders cheered them on.

Later in the day, Nancy Buser and Caroline Jones rallied owners and their pets for a Pet Parade. Judges Rita Lieske, Sandy Sillery and Ed McBride, all from neighboring communities, chose Seth Furman and dog Lady as the Grand Prize Winner.

Ryan Muse, 10, is the 2009 official Roachdale Roach Race winner. Over 150 people attended the race and 36 races took place last Friday night at the revivable of the 1980-90's event.

"Rain did hinder the plans of other participants. While the weather severely dampened the use of the inflatables from Big Bounce Fun House Rentals, during the day children were seen splashing and playing happily.

Also affected by the weather was the Memorial Balloon Release that was cancelled. Organizer Pat Allen has suggested planning an Ice Cream Social and rescheduling the release with that event.

Proceeds from the raffle helped to offset SummerFest expenses. Stephanie Myer and Joanne Miller are aiding in contacting Raffle Winners.

"Then of course there are the attendees and possibly unacknowledged others who helped to make Roachdale SummerFest 2009 possible even in the face of obstacles and inclement weather.

The PRIDE Initiative would agree that every position of assistance filled was of importance to producing the SummerFest. "Thank you" to the village of participants who made this Hometown Gathering a reality and became the "YOU" in Comm,"YOU"nity," said Yahraus.