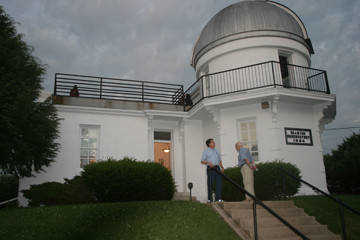 Desserts with the stars at McKim Observatory ended an evening of history and fine food during a progressive dinner at historic locations on Friday evening.

Over 50 members of the Historic Landmarks Foundation enjoyed an educational evening of fine dining in historic locations around Greencastle Friday evening.

Members of the Western Regional District of the Indiana Historic Landmarks Foundation began their progressive dinner evening at the historic Putnam County Courthouse, where they enjoyed appetizers from Treasures on the Square.

The 1905 neoclassical style courthouse occupies the center of the square in downtown Greencastle. Listed in National Register of Historic Places, the courthouse designed by J. W. Gaddis features a glass dome that illuminates the interior, murals and original decorative light fixtures and staircase.

On the courthouse lawn is the Spirit of the American Doughboy statue, a World War I memorial, and a German V-I buzz bomb-turned-World War II memorial.

Dinner catered by Almost Home followed at St. Paul's Catholic Church. The center portion of the church dates to the 1820s. Its Victorian Romanesque style exterior was acquired later in 1890 by the Catholic Church, which enlarged the structure by adding a north and south bays and the steeple.

A presentation by Tommy Kleckner with Historic Landmarks included an overview of a recent mid-century modern home tour in Lafayette. Most of the homes were built in the 1950s and 60s. More than 300 people attended the tour held in May.

The tour showcased five houses in and near the Happy Hollow subdivision in West Lafayette. The area is noted for its admirable collection of mid-century architecture, the result of a post-war residential building boom created when Purdue University's faculty and staff swelled to accommodate returning veterans on the GI bill.

"Boxy modernist houses and low-slung ranch homes were the height of hip when they were built, and they still have a cool factor today. They've been around long enough that some qualify as historic structures -- a point that sparks debate and causes us to view them in a new light," said Kleckner.

Damage to a historic church in Poland was also discussed. In June, an arson damaged the 1869 Poland Chapel in Clay County. Structural damage from the fire was limited to an area around one window, but the blaze charred church pews, caused cracked and broken window glass, and sent soot, smoke and water damage throughout the chapel. Newly constructed wood window sashes stored in the chapel were also destroyed. The handcrafted sashes, slated to replace the severely deteriorated originals, were awaiting glazing.

"It's unclear if insurance will cover the cost of reconstructing the new wood sashes, but the Poland Chapel Historical Society -- which owns and maintains the building -- has begun work on repairing and restoring the National Register-listed building. Historic Landmarks Foundation made three grants to the Historical Society in the 1990s for restoration work at the chapel and repairs to headstones in the adjacent cemetery," explained Kleckner.

Following the presentation, dessert followed at DePauw University's McKim Observatory. The observatory is now located in a residential neighborhood. When it was built in 1884, open farmland surrounded it. Still outfitted with an 1885 Clark Refractor telescope, the landmark remains in use by DePauw students, researchers, and the public as it undergoes a phased restoration.