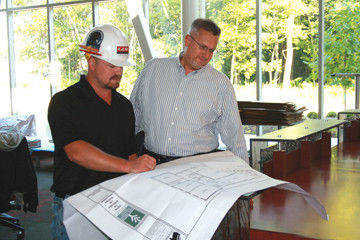 Superintendent of Construction Tom Whitaker, left, looks over blueprints with Contract Manager Kent Forman in the library of the new Ivy Tech campus in Greencastle. Both men work for Fishers-based GDH, one of 13 contractors that worked on the campus, which will open Tuesday.

GREENCASTLE --Students will be in classes at the new Ivy Tech Community College campus in Greencastle way ahead of schedule.

The sprawling 33,300 square foot building was targeted for completion in the spring of 2010, but will open Tuesday.

The new facility, which boasts two floors of classrooms, labs, student gathering spaces and offices, is located on 27 acres of land on Zinc Mill Road that was given to the college by the city of Greencastle. A groundbreaking ceremony was held in May 2008.

Since 1989, Ivy Tech's Greencastle classes were held in a building shared with Area 30 Career Center.

"The weather was good, the materials came in early," he said. "The project just progressed through the summer and everything went very well."

Thirteen different contractors worked on the building, which is open, airy and features large windows on all sides.

"This is just so different from what we're used to," said Sharon Bone, executive director for Ivy Tech's Greencastle campus. "We all have our own space now and won't be on top of each other. The students are very excited about having their own building. I think it really will give them more of a sense of pride in being Ivy Tech students."

"The building is beautiful," he said. "We're so pleased."

Bone said the flow of the building "really makes sense." In addition to the classrooms, labs and offices, there is a state-of-the-art nursing lab set up to simulate a hospital emergency room, a Student Success Center where high stakes testing will be conducted, a bookstore with three times the space of the one at the old Ivy Tech location and a sprawling library overlooking a meadow and forest area.

"I've been very impressed with the contractors," Bone said. "Just seeing the way this has all come together has been amazing."

Ivy Tech Community College is the nation's largest statewide community college with single accreditation. It is Indiana's largest public post-secondary institution, serving more than 130,000 students a year (this semester, enrollment at the Greencastle campus stands at about 650).

There are 23 campuses throughout the state. The average class size is 22. Students can earn a degree for less than $6,000. And with credits that transfer, students can save money by completing the first two years of a four-year degree at Ivy Tech.