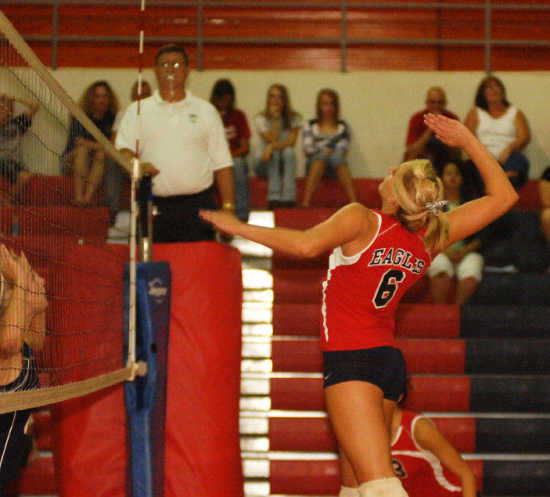 GREENCASTLE -- Whenever you have two teams that are sectional opponents match up in the regular season it's an intense game -- mix in a little county rivalry and you have something more.

So was the case Thursday at South Putnam when the Cougars invaded in hopes of extending their win streak to two, but the Eagles defense was too strong as South Putnam won the match in three, 25-11, 25-23, 25-22.

"I thought we had a really balanced attack tonight," SPHS coach Lindsey Blackman said. "And that we really shared the ball well tonight also."

The Eagles balanced attack made short work of the Cougars in the first set, with kills coming from Katelyn Sibbitt, Brooke Boejter, Ashley Wombles and Kendra Latham.

But the next set was a different story.

North Putnam came out swinging in the second set, jumping out to a 7-3 lead thanks to its defense. But as quickly as they jumped out in front, the Cougars found themselves chasing the Eagles again.

South Putnam went on an 8-0 run with kills coming from Sibbitt and Wombles. Wombles also came up with a big block. North Putnam battled back and knotted the score at 18 and kept it close, but a kill by Sibbitt and a stuff block by Wombles gave the Eagles the 25-23 win.

"Ashley Wombles had a big offensive and defensive night for us," Blackman said. "She has been our most consistent blocker this season.

"And Katelyn Sibbitt was all over the floor tonight as well. I felt wherever she was on the floor, she was making the play," Blackman added.

Sibbitt ended the night with five kills and four aces.

The last set was just as exciting.

South Putnam would build a lead and North Putnam would cut it down. It wasn't until the final points when the victor was decided. The Eagles built a 20-13 lead and it looked like they were going to steamroll their way to the win, but it didn't happen that way.

North Putnam got back-to-back kills from Paxton Stephenson and Nikki Hamilton to cut the lead to five. South answered back with a kill from Wombles and an ace by Sibbitt to make it a 22-15 set. North Putnam then went on 7-2 run, thanks to four kills by Megan Robinson, making it a two-point game. But a Boetjer kill sealed the deal, giving the Eagles a 25-23 win.

"Our front row really came through for us tonight," Blackman said. "In the second set we let up a little where we started to tip more than we were attacking, but we turned it on at the end and stayed focused."

Outside of the first set, NPHS coach Jill Schreiber was happy with the way her team played in the last two sets.

"But we did have a couple of girls playing in different positions that they usually don't play in and that threw off our hitting and our rotation," Schreiber said.

Outside of Sibbitt, the Eagles were led offensively by Boetjer and Wombles, who had six kills each, while Rachel Egold had three. Wombles also had three blocks, including two stuffs.

For the Cougars, it was Robinson who led the offense with six kills. She also had five blocks to lead the defense. Stephenson had three kills while Carlye McGaughey had two.