Cougars capitalize on turnovers for win 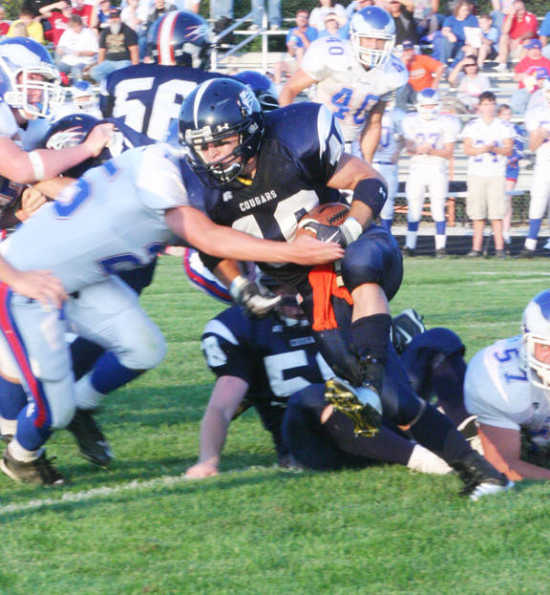 Cougar Hank Spencer powers through the South Putnam line during Friday's 27-7 win. Spencer rushed for 46 yards and a touchdown in the Cougars' win.

ROACHDALE -- South Putnam entered North Putnam sporting a perfect record and a reputation as having one of the toughest lines in the business. North Putnam welcomed them with a young team searching for its own identity and a line that's been making some noise of their own.

In a clash of titans, something has to give.

North Putnam left the field with the same intensity it entered with and enjoyed a 27-7 victory over the Eagles.

"That is a great win for our team. That is a great team we just beat. I got all the respect in the world for coach Burgess and his staff. They do a great job. Our kids came out fired up and I knew we had it in us. The first couple games we've just haven't been clicking offensively," Cougars head coach Greg Barrett said.

The name of the game Friday was turnovers. South Putnam committed six, while the Cougars never put the ball on the turf.

"Oh boy, they killed us," SPHS head coach Troy Burgess said. "Defense really stepped up and made some big stops and kept us in the game for a long, long time. They did all they could do. We just couldn't move the ball.

"We couldn't move the ball against them. They just beat us at our game. We tried to line up and run the football, we just didn't have much success at it," he said.

North Putnam might have been able to move the ball and capitalize on turnovers, but it was South that drew first blood.

After a quick out by the Cougars, South sent their workhorse into the trenches. Drew Cash had his number called on the first three Eagle possessions, but it was on the seventh where he did his damage.

Cash took the handoff from quarterback John Spencer and blazed a trail 59-yards to the endzone, giving the Eagles their first and only score of the night. Cash rushed for 154 yards on the night.

The Cougars regained the momentum on an Eagles' fourth and four when Kyle Adams blocked a Cash punt giving North Putnam great field position. Three pass plays later; Kolton Everts hit Darr Boruff for a 12-yard strike. The Cougar's missed the extra point and were down 7-6.

"I tell you what, the blocked punt was huge for us," Barrett commented. "I've said it all year, there was a couple previous game where I thought we could get one. The thing I'm most excited about tonight is that we're a fast team and we showed it tonight. Our speed came in handy and defensively, we played our tails off and the defensive staff did a great job getting those guys ready."

North Putnam road the 12-7 advantage into the locker room.

The Eagles' seemed poised to own the second half, after taking the kickoff and running 12 straight running plays, nine of which were to Cash. At the 5:41 mark in the third, a collective gasp from the South Putnam crowd went out, as Cash lay motionless after a one-yard run. He soon returned to the lineup, but only touched the ball two more times for the remainder of the game.

The third quarter expired with both teams going scoreless, but North Putnam was far from over. The defense snagged two interceptions and two more scores put the game out of reach.

Shawn Diebold gave the Cougar crowd something to cheer about when he took a punt back for a touchdown. Unfortunately a penalty brought the score back, but it only delayed the inevitable.

Three plays later, Everts tucked the ball and slashed through the South Putnam defense for a 47-yard score, giving North Putnam a 19-7 advantage with 10:30 on the clock.

The Cougars put up their final score after Caleb Vondesaar recovered a fumble at the three-yard line. Hank Spencer muscled his way in from three-yards at the 5:03 mark to bring the score to its final tally.

Everts led the team with 78 yards rushing and 155 yards passing and two touchdowns.

Following the game, Burgess acknowledged the respect he has for the Cougar program and noted that when the Eagles lose, it starts at the top and encompasses the entire team.

"I give them a lot of credit. Greg (Barrett) does a great job, his kids were very prepared and we just got outplayed tonight and I got outcoached tonight," he said. "We talk about, we win as a team and we lose as a team.

"We're going to take this thing together. Not one person, not one side of the ball -- we win together, we lose together. We just got beat tonight by a good team," Burgess added.

Burgess' counterpart Barrett is beginning to see what he knew was always there. He spoke about how his young line stepped up on the night and the sophomore signal caller that is coming into his own.

"I've been saying since last year that Kolten had it in him and he's going to get better each week and he has gotten better. He played a great game tonight. He was patient," he added.

Burgess commented that his team might have begun to believe some of the hype they had been hearing and admitted the sometimes it's hard not too. The lesson he hopes his team took from Friday is that anybody can beat anybody on any given night. He noted the biggest thing for his squad to do is to get back to work come Monday.

For Barrett, he wants his team to enjoy the win, but acknowledged that tomorrow it's back to work as usual.

South Putnam will host Greencastle Friday at 7 p.m., while the Cougars will host Gary Wallace at 5 p.m. Saturday.

Next game -- South Putnam will host Greencastle Friday at 7 p.m., while the Cougars will host Gary Wallace at 5 p.m. Saturday.