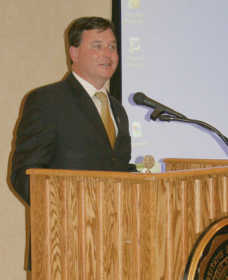 Indiana Secretary of State Todd Rokita speaks to the Greencastle Rotary Club at its Wednesday meeting.

GREENCASTLE -- Indiana Secretary of State Todd Rokita is passionate about how the state's voting districts are divided. He hopes the majority of Hoosiers are with him on this topic.

Rokita's office is currently promoting the "Rethinking Redistricting" program, whose aim is "re-drawing legislative districts to better represent people, no politics." Rokita was at the Walden Inn Wednesday afternoon to speak to the Greencastle Rotary Club about the issue.

"We have, as Hoosiers, one chance every 10 years to get this right," Rokita told the club.

Following each census, the state redraws the lines of the districts for U.S. House, Indiana Senate and Indiana House districts. While most states have a number of rules regarding how districts are drawn, Indiana is what Rokita likes to call "the Wild West." The state's only rule is that the districts be contiguous.

Under the state's current configuration, the districts are contiguous, but the divisions don't seem exactly logical. U.S. House District 8, which includes Putnam and Clay counties, stretches from Evansville nearly 200 miles to the north into Warren County.

The secretary of state laid out for the club what he considers to be the four main problems of the current system: 1) lack of respect for communities of common interest; 2) lack of compactness; 3) lack of competition; and 4) voter confusion.

It's a system that makes little sense to Rokita, and he hopes to change the state law in time for the 2011 redistricting. To do so, he is proposing four criteria for new redistricting laws with one possible added benefit. The criteria that he would like to see included are 1) no political data be considered; 2) keep communities of interest together; 3) compactness; and 4) balance population.

Rokita and his office have also proposed a different set of district lines based on these new criteria. The proposed districts are more compact and show less tendency to snake around the state, seemingly avoiding certain communities.

"These lines I've proposed would drastically increase competitiveness," Rokita said. "This is what our republic is all about."

Setting the new district rules is not a matter in Rokita's hands, however. The matter will have to go before the 2010 General Assembly in order to become law. He is challenging the legislature to take this issue seriously and consider some big reforms.

"Legislators can just as easily do the right thing as they can do the wrong thing," he said.

Because of this, the secretary is trying to promote the issue across the state. He told the club members he is in the process of visiting Rotary clubs and other civic organizations across the state, trying to get community leaders on board with the plan and using their help to promote it.

"In the state of Indiana in a time like this, your leadership is needed," Rokita said.

Rokita encouraged the Rotary members and all Hoosier to visit www.rethinkingredistricting.com to learn more about his plan.