The Outsiders is one of this year's best 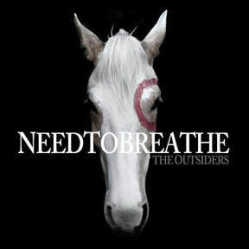 The Outsiders, the third release from NEEDTOBREATHE, hit stores Tuesday. However, for the several hundred of us lucky enough to see the band live at Radio Radio in Indy on Saturday, it was available for purchase three days early.

This wasn't the only perk to being at the show, though. I walked in on Saturday excited for the show but unsure what to expect. I walked out needing to see these guys again, and again.

Lead singer and guitarist Bear Rinehart said in an interview with the Banner Graphic the live show is the best aspect of his band.

"We've been doing this for almost 10 years now. We think it (touring) is the best part of what we do," Rinehart said.

It shows onstage. Bear's face displays the emotion of every word he sings. Brother Bo Rinehart (guitar) and bassist Seth Bolt can't contain themselves, using every inch of stage available to burn all their energy. They often meet in the middle of the stage, returning to the mics just in time to sing the backing vocals for Bear. Drummer Joe Stillwell holds it all together, rarely looking as excited as the others, but laying down the beats that keep them hopping.

Even touring pianist David Leonard was into it. While he may not be part of the studio lineup, he's an integral part of what happens on stage.

Another fan on the street told me this could be our last chance to see these guys at this type of venue. The demand may become too great for them to continue playing small clubs.

While I will never begrudge any band success, it will be a shame not to be so close to the band if they are, indeed, playing to huge crowds.

And huge crowds should come if people give The Outsiders the time it deserves. The live show may be the best thing the band does, but they do pretty well in the studio.

It's an eclectic group of songs, showing the band's broad range of influences.

"I think this record's all over the place musically," said Bear. "There's everything from Peter Gabriel-type stuff to Ryan Adams-y stuff."

It's so varied, in fact, that the band used three different co-producers. While the band contributed to the production of all 14 tracks, they were joined in the booth by Rick Beato on six tracks, Jim Scott on five and John Alagia on three.

Not even the producers were always sure, but the band members stuck to their guns.

"They were constantly saying, 'Are you sure you want to try this?' We weren't buying into that," Bear said. "We were like, we had to put it down and go with it.

None of this should indicate the album doesn't play well. Listening to it start to finish, something unifies it, even if the listener isn't sure what it is.

"Two brothers in the band write all the songs -- me and my brother. And the other guys, we've all known each other since we were kids. I think that, really, is a big part of who we are as a band," Bear said. "There's a real sense of family when we're making records and when we're doing live shows. That's what ties it together.

"It's hard to forget all the influences we've had in 10 years as a band and even before that," he added.

The years of association, growing up in Possum Kingdom, S.C., have not only united the band, but also contributed the album's title and the opening track.

"I think there's a lot of reasons (for the name). We come from a small town, and there's absolutely no music scene. We had nothing we could sort of grab onto early on," Rinehart said. "In a way, it was us against the world.

"Even when we signed with Atlantic, we were discouraged from being ourselves. We were very Southern and very un-New York and L.A." he said. "With our last record and the success we had, we came to grips with it."

Bear feels the band has done some maturing and has gained much in confidence.

"I think it was more us than everybody else, but we decided that this was something that we can use and something we shouldn't be ashamed of. That's what the record came to be about. It's not necessarily a negative thing. We're trying to say something different that we're proud of. We feel very good about the fact that we're outsiders. I feel like that gives us a perspective on things that other people don't have."

The Outsiders is the most pleasant surprise I've had in a long time. A month ago, I knew essentially nothing about this band, but they've produced one of my favorite albums of 2009.

The title track, lead single "Lay 'Em Down," "Prisoner," "Through Smoke" and "What You've Done to Me" are just a few of the top tracks on this one, but the list doesn't stop there. On stage, this band never takes a break. The same is true on an album. Tracks 1-14 are all good. This one should be purchased in full.