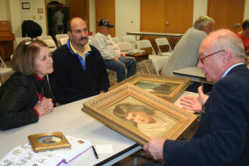 On the right, Ben Solomon, an appraiser with Solomon/Jones Inc., out of Indianapolis, appraises some paintings brought in by Thom and Gwen Morris of Greencastle during the antique road show hosted by Friends of the Library.

GREENCASTLE -- Ever wonder if any of the junk in the attic is actually a valuable treasure?

Coatesville resident Vern Jones owns some very old guns and a Nazi banner brought to America from Germany by his great-grandfather following World War II. While these are sentimental items, Jones wanted to know how much money they were worth.

To cure his curiosity, he attended the antique appraisal road show hosted by Friends of the Library. Bill Kranz with Antique Helper out of Indianapolis appraised Jones' items -- a German Lugar, an 1851 Colt Navy, a Flint Lock Muzzle Loader and the 5-foot by 12-foot Nazi banner.

"The muzzle loader was made from a kit by my great-grandfather in approximately 1850," Jones said. "He used it to hunt food."

The Nazi banner, he continued, was brought back from the Black Forest area during World War II.

"My great-granddad used it to keep warm and to keep from itching due to wool blankets used during the war," he said.

Jones wasn't the only one curious about the monetary worth of some family heirlooms. Thom and Gwen Morris of Greencastle brought three paintings to Ben Solomon, an appraiser with Solomon/Jones out of Indianapolis.

Solomon shared some history of their paintings before giving them an appraisal. The painting of a young girl was framed in the 1880s or 1890s. An amateur most likely painted the nature scene, which was probably not a real scene, he noted. And the porcelain face painting was a French item from the 1890s to 1900s, while the frame was more current.

"It was framed in South Bend," said Gwen. "(All the items) have been in the family forever."

The appraisers saw nearly 70 items during the "road show" including glassware, jewelry and paintings. But Alan and Donna Stanley of Greencastle brought in the biggest item of the day -- a six-light crystal chandelier.

The Stanleys purchased the light fixture in 1934 from the First Christian Church. It originally hung in the dining room of the old Commercial Hotel, which was located at the current parking lot of the church.

The appraisers said it was French and very expensive.

Everyone who brought an item to the road show paid $10 for the first item and $5 for each additional item to be appraised by one of the three appraisers. The idea was a fundraiser for the library.

"We want the community to know what a treasure the library is," said Cathryn Ensley, member of Friends of the Library.

In addition to the road show, FOL hosted an antique sale and its monthly book sale, which featured books at half price. However, anyone purchasing a book from the sale could have found a "treasure." Inside a limited number of books were various gift certificates donated by local businesses.