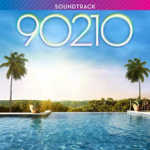 For five songs, Soundtrack 90210, featuring music from the CW series, is an outstanding compilation. With contributors like Adele, The Raconteurs, N.E.R.D., JET and OK Go, the opening barrage can't help but be strong.

However, with The All-American Rejects' contribution "Sierra's Song" on the sixth track, the collection takes a serious dive toward teen-angst driven pop rock from which it never recovers.

In the end, it's a compilation that doesn't live up to the promise it shows during its opening tracks.

A collaboration between Adele and The Raconteurs, "Many Shades of Black" opens the album in style. With the Grammy-winning English soul singer and Jack White performing on the same track, the song is every bit of what it should be. We get Adele's soulful vocals backed by an outstanding arrangement from White and company.

This is definitely the song of the album.

JET's "One Hipster One Bullit" is another strong moment. It's the kind of high-energy number with crunchy guitars we've come to expect from the Australian quartet.

Strong tracks are also contributed by N.E.R.D., featuring Santigold ("Soldier"), MuteMath ("Valium") and OK Go ("I Want You So Bad I Can't Breathe") near the album's beginning.

But with "Sierra's Song," the record gets a bit whiny. Instead of being a temporary diversion, this becomes a funk in which the album stays.

One might say teen angst should be expected for the soundtrack to a show about southern California teenagers. This may be the case, but it doesn't save this album.

Staying in a serious slump for several songs, the collection recovers slightly with average contributions from Darrelle London and Stars Crashing Cars toward the end, but not much.

A 23-second remix of "90210 Main Theme" punctuates the collection, and is probably only necessary for serious fans of the show.

Soundtrack 90210 starts off with great promise, but quickly fizzles. It probably isn't an album to buy in its entirety. However, there are certainly tracks worthy of download, with "Many Shades of Black" at the top of the list.

The good news for fans of 90210 is the show is unveiling these songs as the season progresses, so they'll get a selection of what is worth downloading.