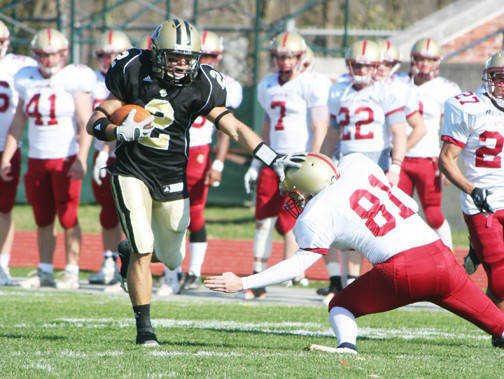 P.J. Gbur throws down a stiff arm on a Kangaroo defender Saturday during the Tigers SCAC game against Austin.

GREENCASTLE -- DePauw's 34-23 Saturday win over Austin gave them a share of the SCAC title; what happened a few hours later gave them something even more.

Taking care of their own business, DePauw had to rely on SCAC foe Trinity to help propel them into the postseason by defeating Centre and that's precisely what happened.

With Centre losing to Trinity 27-17, DePauw finished the season tied with Millsaps atop the SCAC standings, but held the tiebreaker, thus punching their ticket to the NCAA Division III Championship tournament.

First, senior Bryan Mulligan set a new school record for receptions, then teammate Alex Koors broke the single season record for receiving yardage. It only seems fitting that the duo also provided DePauw with its first two scores of the contest.

Following a scoreless first quarter, senior quarterback Spud Dick found Mulligan for a five-yard strike in the corner of the end zone to take the early lead.

Austin quickly responded with two scores, but as they have done all season, Dick and Koors hooked up for a eight-yard touchdown before the half to tie the game at 14-all entering the break.

The second half began with a John Reisig field goal for Austin, putting them up 17-14, but DePauw was able to put together two impressive third quarter drives that made the difference in the game.

DePauw regained the lead when Derrick Karazsia capped a 69-yard drive with a one-yard touchdown punch, giving DPU the 21-17 lead. After a major defensive stop, the Tigers marched the ball 62 yards with sophomore rusher Jon Ellis scoring from one-yard out with 1:27 to go in the third quarter.

Following another Austin score, fans witness some trademark DePauw football. The Tigers began their next drive on their own 22-yard line, and 15 plays later Ellis scored from two yards out to give DPU the 34-23 lead and ultimately the win.

With 3:41 on the clock, the DePauw defense once again came up huge and stopped the Kangaroos drive to preserve the win.

"We knew it was going to be a fight," head coach Robbie Long commented. "They're a tough group and we knew we just had to weather the storm. They were making some plays there in the second quarter and we were struggling to keep up with them. But we went in at halftime, made some adjustments and the guys came out and fought. That's all we ever ask them to do is come out here and fight."

Ellis and Karazsia combined to rush for 95 yards and three touchdowns in the win.

After the game, an emotional Long put what the season has meant to him and his squad into perspective.

The Tigers were still celebrating their 11-point win when the got the news they had qualified for post season play. 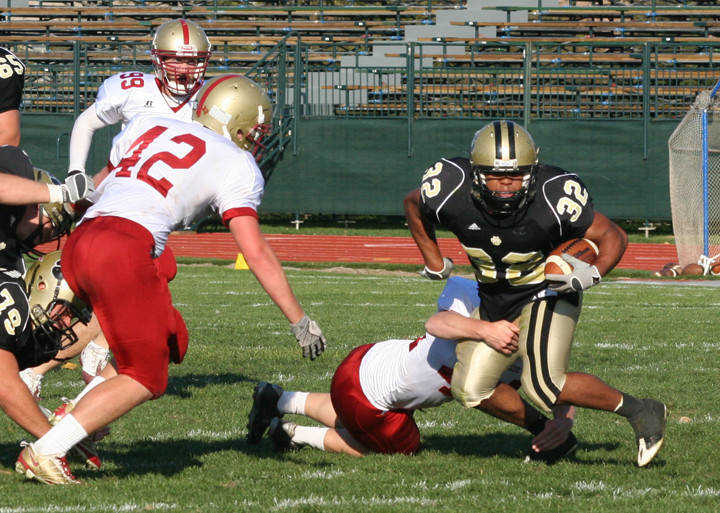 Running Back John Ellis looks upfield while trying to break free from an Austin defender Saturday afternoon at Blackstock Stadium.

"Actually, most of the players were still in the parking lot with their parents tailgating and a couple of them had their laptops out watching the game online. The coaching staff had just left the stadium and were going to our cars and got the news," Long said.

Long acknowledged the Tigers never thought the day would end any other way.

"It was great," he said describing his feelings about the news. "Everyone was extremely excited. We never lost hope that was going to be the end result. We knew we needed help -- we held up our end of the bargain and obviously we're excited to qualify for postseason play," he concluded.

Up next for DePauw will be the season-ending Monon Bell Classic against Wabash Saturday. Long said the upcoming week will be approached like any other and that the team takes everything a week at a time.

DePauw will host Wabash this Saturday in their 116th meeting in the Monon Bell Classic. Kickoff is set for 1:07 p.m. and will be carried live on 91.5 WGRE and HDNet. The all-time series is tied 53-53-9.