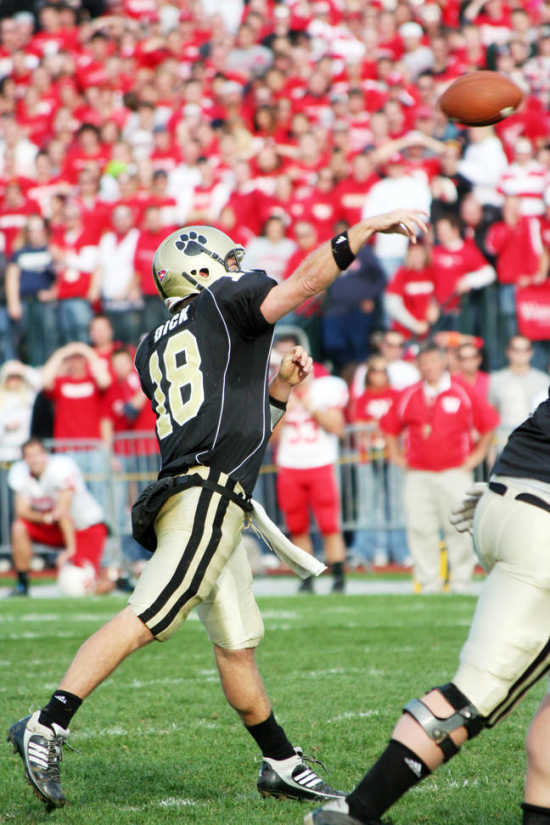 GREENCASTLE -- Following a 7-2 regular season, DePauw takes the field Saturday in its first-ever NCAA Division III Playoff appearance, and for head coach Robbie Long and his Tigers, it's all about being aggressive.

The Tigers drew the high-powered 10-0 Thomas More squad in their first-round game and their aggressive defense will no doubt play a big part in the outcome.

Long knows the challenge before his DePauw squad and said it's just a matter of doing what they've done all season.

"We've got to be prepared, the quarterback is a really good athlete -- he can run it and he can throw it," he said. "They have two very good tailbacks that we always have to be aware of.

"When they decide to throw it, they have some receivers that are bigger than what we're used to seeing," Long continued. "We haven't seen a kid this big for a while.

"There's definitely some challenged out there, but it comes down to doing your job on every play, when you're playing an option team and making sure -- again, you've got a dive-guy, you've got a quarterback guy and you've got a pitch guy and all of those guys have to do their job and be sound on every play," Long commented.

The Saints come in with quarterback Trevor Stellman and tailback Cordario Collier leading the way. Both players pose double threats to the Tigers defense.

Steller is second on the team with 55 rushing yards per game and five touchdowns, but he does most of his damage through the air. He is currently ranked ninth in the nation with a 166.25 pass efficiency rating and has collected 1,634 yards and 21 touchdowns on the season.

Collier leads the team in rushing with 79 yards per contest and in total catches with 33. He has recorded nine touchdowns and a whopping 5.4 yards per carry this season.

The Saints defense is no slouch either. They rank 14th in the nation, with Brad Steinmartz recording 89 total tackles to lead the way. Nick Gramke follows with 79 and Brandon Kohrs with 66.

The Tigers have found success this season with senior quarterback Spud Dick leading the way. Dick is one of DePauw's most prolific passers in the program's history. He currently holds seven passing records, including passing yards (8,994), touchdown passes (72) and 300-yard passing games (15).

This season he is averaging 308 yards per game and has thrown 23 touchdowns. Dick also has a pass efficiency rating of 164.21 and a passing completion percentage of 74 percent.

Dick's favorite target this season has been junior Alex Koors, who has recorded a school-record 1,195 yards and 12 touchdowns. Senior Bryan Mulligan has collected 55 catches and 577 yards with five touchdowns, while junior Brayden Dahlstrom has 46 catches for 437 yards and two touchdowns.

The Tigers are coming off their 32-19 loss to Wabash in the Monon Bell game, but Long commented that the team has had a good week of practice and has put the Bell loss behind them.

"It's been good," he said of practice. "The Bell game is a big deal. To lose the game and play the way we played -- obviously the guys weren't very happy with the way that thing went. But the great thing has been, they've put it to bed and they want to continue to play with each other. They enjoy going out there on Saturday and competing together.

"They're looking forward to the next one and they know that in a year's time we'll see Wabash and they'll have to put the Bell on the line and hopefully we'll have a better showing. We've moved on to Thomas More now and we're preparing to do the things we've got to do to get the school's first playoff win," Long commented.

When asked about individuals leading this team to their first playoff berth in school history, Long was quick to note that a lot of the credit is owed to his senior class. He acknowledged there are younger guys that are key contributors, but the seniors are they ones who have set the tone.

"When you talk about leading the team to the playoffs, you've got to start with the seniors," Long commented. "This senior class has done an unbelievable job time from they got here until now to prepare this team for this moment. I'm extremely proud of the work this group has done, when you talk about this senior class and they mean a lot to this program and the history of this program. We could not have done it without them.

"Whether you're talking about Spud or David Joeckel, Bryan Mulligan or Brad Paus or the guys on defense -- Alex Fitch and Robert Allen. This group of guys has done a great job of getting us where we are," he continued.

"We've got some younger guys who are big time football players. When you talk about Alex Koors, Brayden Dahlstrom and the guys on defense who have been having an unbelievable year. We've got a lot of great football players and guys, who can play this game, but when you talk about getting this team to where we are now -- you've got to pay your respects to this group of seniors," he said.

When asked about what this season has meant to him personally, Long said it was all about being on the field with the team. The respect he has for his team was apparent as he spoke about the impact of this season.

"The highlight of my day is getting to see these kids and getting to work with them every day in practice. It's what I look forward to every day," Long said. "It's a special group from top to bottom, from seniors all the way down to freshmen; they're a special group of guys that I really enjoy working with on a daily basis.

"Just like they're looking to play with to continue playing with each other for another week, I feel the same way. I want to keep working with this team and getting better every day. There's still improvement to be made on this football team and we come out here and try to do that every day in practice and hope that on Saturday we can put a good product on the field. I love having the opportunity to work with these guys every day," Long concluded.

The Tigers will travel to Crestview, Ky. to face Thomas More at noon Saturday. The game will be carried live on DePauw's 91.5 WGRE.