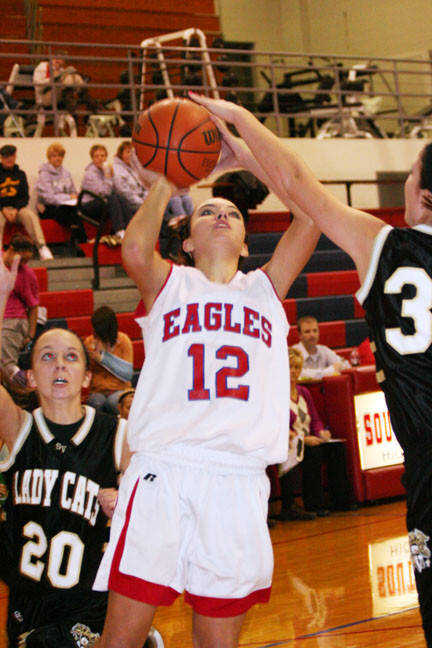 South Putnam's Emily Dabkowski puts up a short jumper in the first half of Tuesday's contest with South Vemillion.

GREENCASTLE -- An unkind iron and a rough first quarter held the South Putnam girls' basketball team on the ropes Tuesday when it faced South Vermillion.

The Eagles fell 52-39, dropping their second straight and moving to 2-5 on the season.

"We got down early and gave up a three to start the game and it snowballed from there," Steffy added.

The Eagles opened the game by allowing seven consecutive points for the Wildcats, and by the end found themselves down 23-4. A strong second quarter effort chipped into the lead, but it was clear the Eagles had their work cut out for them if they were to get the win.

Jenny Thompson and Emily Dabkowski led the way in the second quarter, combining for 10 of South Putnam's 14 points. An even bigger stat was the Eagles failed to make a trip to the free throw line in the first half. They entered the break down 31-18.

South Putnam come out in the third and stayed right with the Wildcats.

The Eagles began to exploit their advantage in the paint, with Brooke Boetjer connecting on six points and teammate Jessica Thompson adding four of her own. But still, South Putnam had trouble connecting on much outside and went into the final quarter trailing 43-28.

In the fourth quarter, the Eagles played upbeat and continued to fight, with Jessica and Jenny Thompson, along with Mattie Varvel, Kelsey Searles and Boetjer adding buckets of their own.

A highlight in the quarter came midway through when Jessica Thompson stole the ball and was able to flip it behind her while on her knees -- all before going out of bounds. Jenny Thompson scored on a jumper off of the save.

In the end, their first quarter woes ultimately took their toll and the Eagles came up short 52-39.

Boetjer led the Eagles on the night with 11 points, followed by Dabkowski with eight. Jessica Thompson, Jenny Thompson and Searles all added four points.

Steffy knows this season is going to be one of learning the system and noted the team will regroup and get ready to battle Cascade.

"The kids -- they worked hard in spurts and we just have a lot of learning to do," Steffy commented. "We did one of those things where you think you take a few steps forward and then you get that one back. Like I told them in there after the game, it's over, it's done with, so there's nothing we can about it. We got a game on Friday and the nice thing is we get to go back out there and play again.

South Putnam will travel to Cascade Friday at 6 p.m. for the first half of a WCC double-header.