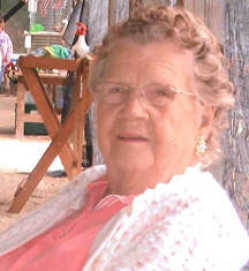 She was born Aug. 13, 1922 in Owen County to Alvine and Hatty Douglass Piso. She graduated from Quincy High School in 1941. Peggy married David Danhour on Nov. 29, 1941. She worked at Finley's Grocery Store, in Harmony for 13 years.

She married Kenneth Harvey "Hap" Day on Aug. 18, 1974. After marrying Mr. Day she lived in Lehigh, Fla. for 25 years. While in Florida, she enjoyed playing miniature golf, deep-sea fishing, sewing bibs and lap blankets for nursing home residents and to donate to Riley Hospital. She was a member of the "Quincy Where" group which traveled to other Quincys across the United States, Wesley Chapel Church and volunteered at the food pantry and the Brazil Moose Lodge.

Calling will be at French Funeral Home from 4 to 8 p.m. Monday and again Tuesday from 10am until time of service. In lieu of flowers, donations may be made to Wesley Chapel Church.