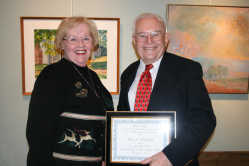 Jinsie Bingham with the Washburn Chapter of the Daughters of the American Revolution presents retired DePauw professor and author John Joseph Baughman with the first ever Historic Preservation Award.

GREENCASTLE -- Retired DePauw professor and author John Baughman was honored Monday by the Washburn Chapter of the Daughters of the American Revolution with the organization's first ever award for historic preservation.

"This year, I want to start a tradition to honor some of the people in Putnam County who have actually done something to preserve our history," said DAR member Jinsie Bingham.

Baughman has chronicled the history of the area in a book called "Our Past, Their Present: Historical Essays on Putnam County Indiana."

He served as the official Putnam County Historian and has been very active in the preservation of DePauw Archives. He has also authored many articles and papers for the university and the Methodist Church in Indiana.

"Most important of all, it is John Baughman who has chronicled our local history in a book. This book is indexed and there are many photos. And, best of all, it's about us," claimed Bingham as she presented the award to Baughman.

The author was born in Evansville and graduated fro high school in Detroit, but has deep Putnam County ancestral ties. He also attended DePauw University, where he received his bachelor's degree. He holds a Masters from Harvard University and a Doctorate from the University of Michigan.

Baughman was also a Fulbright scholar at the University of Paris in 1951 and '52.

"Lucky for us, John Baughman came back to DePauw to teach and became very much a part of the DePauw/Greencastle/Putnam County community," added Bingham.

He published Putnam County Interim Report. Indiana Sites and Structure Inventory in 1982. He co-authored "DePauw University: A Pictorial History" in 1987, wrote "United Methodism in Indiana," in 1996 and published "Our Past, Their Present" in 2008.

The book can be purchased at the Putnam County Museum.

In 1998, he received an Alumni Citation from the Board of Directors of the DePauw Alumni Association in recognition of outstanding University service and President's Award for 2000 from the Midwest Archives Conference.

He served with the United States Army in Europe from 1943 to 1945 and received the Order of Purple Heart, Combat Infantry Badge.

He is married to Elizabeth Dowden and has a son John Cavins. He currently lives in Greencastle.