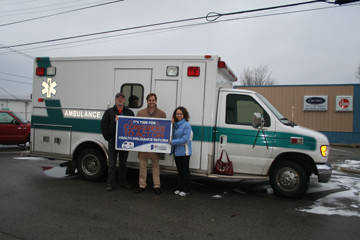 Greencastle was the second stop on a state tour by the ambulance above and its crew, which is calling for health care reform in the country. Crew members who stopped in Greencastle as part of the "Code Blue! We need reform -- stat!" ambulance tour were, from left, Eighth District Organizer Brad Riley, Field Director Sam Gilchrist and Communications Director Reesa Kossoff. The tour, organized by Indiana Change That Works, is calling for "elected officials to vote 'yes' to a plan that will ensure affordable coverage for nearly every American." While in Greencastle, the crew met with Kay Sligh, the owner of a local child care business who is currently uninsured. The premiums are simply unoffordable for someone who is self-employed. As they travel around the state, the "Code Blue" crew is trying to tell stories like these as well as meeting with elected officials. Ultimately, they hope to collect what they've found on the tour and present the information to Senators Evan Bayh and Richard Lugar in hopes of getting them to vote for health care reform. Other stops on the tour have included Gary, Terre Haute, Washington, Princeton, Evansville, New Harmony, New Albany, Charlestown, Madison, Seymour, North Vernon, Kokomo, Logansport, Plymouth, Michigan City and Elkhart.
Comments
View 1 comment
Note: The nature of the Internet makes it impractical for our staff to review every comment. Please note that those who post comments on this website may do so using a screen name, which may or may not reflect a website user's actual name. Readers should be careful not to assign comments to real people who may have names similar to screen names. Refrain from obscenity in your comments, and to keep discussions civil, don't say anything in a way your grandmother would be ashamed to read.
Respond to this story