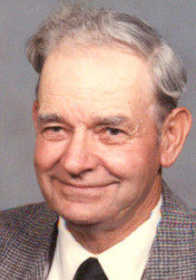 He was born July 15, 1924 to Clark and Lois Long Woody near Thorntown. He was educated at Thorntown schools and attended Purdue University. He was a graduate of the Purdue Ag Winter School. He was active in 4-H and Rural Youth in Boone County.

He married Margaret Smith August 3, 1947 at the Presbyterian Church in Thorntown. He farmed in Boone, Clinton and Montgomery counties, moving near Darlington in 1962.

He was Montgomery County's representative on the Farmers Home Administration Board for three years. He served on the Montgomery Cattlemen's Association board and served on the Sugar Creek Township advisory board and was a member of Darlington Lions Club.

As a member of Darlington United Methodist Church, he served on various committees, church treasurer, lay leader and delegate to annual conference. He and his wife Margaret were "Volunteers in Mission" with the United Methodist Church and helped build churches and church-related buildings for Hispanic congregations.

Recently, Richard was awarded as an Older Hoosier of the Year and was honored by the Life Care Centers of America for his dedicated volunteer work. He has participated in the Sunshine Chorus in Crawfordsville.

Survivors include his sister, Charlotte Seiler of Venice, Fla.; a brother, Clifford Woody and wife Leanna of Thorntown; sons Robert Woody and wife Margaret of Stockwell, James Woody and wife Debbie of Greencastle; a daughter, Kristen Dockter of Houston; and six grandchildren.

In lieu of flowers, donations can be made to Darlington United Methodist Church or Habitat for Humanity.

A funeral service for Mr. Woody will be 1 p.m. Monday at Burkhart Funeral Home in Crawfordsville with the Rev. Andy Payton officiating. Entombment will follow at the Green Lawn Cemetery mausoleum in Frankfort. Visitation will be Sunday from 4 to 8 p.m. at the funeral home.

Online condolences can be made at www.BurkhartFH.com.