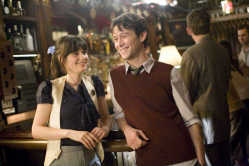 One of the gems of the summer, ironically, was 500 Days of Summer starring Joseph Gordon-Levitt and Zooey Deschanel and directed by Marc Webb. Its non-linear storyline and a great performance from Levitt made this the best romantic comedy of the year.

The story follows Tom Hansen (Levitt) as he meets, falls in love with and has to endure the endless heartbreak of Summer Finn (Deschanel). It covers the span of 500 days as Tom attempts to find a way into Summer's heart and the impact the failed relationship has on his life.

When the duo meet, Tom is one of the top producers at the greeting card company he writes for and she is the boss's executive assistant. But soon his career suffers the same roller coaster ride that his doomed relationship with Summer does and he finds himself moved to consolations after Summer quits the company and his mood takes a turn for the worse.

Summer and Tom meet up again when they both attend the wedding of a coworker and spend the train ride home connecting and giving Tom another false sense that things will be OK. However, when he attends the party Summer invites him to, he spies she's wearing an engagement ring and abruptly leaves the party.

After only leaving his apartment for alcohol and junk food for days, Tom returns to work more disillusioned than ever. During an idea meeting, he lays down a tirade, making the connection that the greeting card companies of the world are at fault for feelings of heartbreak because they display an unachievable level of happiness their consumers can never fully live up to. Having been trained as an architect, Tom quits and sets out to pursue his first love.

Tom and Summer's next meeting is at a his favorite place that overlooks a number of buildings he likes, and it's then that Tom can finally make peace with the departure of his love.

Twelve days later, as he is waiting to interview for an architecture job, Tom meets a lovely young lady who's vying for the same position. Mustering up the courage, he asks her out for coffee, and after refusing at first, she accepts and it looks like things will work out for Tom. He asks her name before entering the meeting and she replies "Autumn". A little cheesy, but it works perfectly for this film.

It's a quirky little movie that has some fine acting and is deceptively funny. I was surprised at how many times I found myself laughing. The film also features one of my favorite scenes of 2009. After Tom and Summer, uhhum, spend the night together, Tom enjoys a walk to work that turns into an elaborate musical number with ground dancers, animated bluebirds and Hall & Oates "You Make My Dream" as a backdrop. It's corny, but in all the right ways.

I've been a huge fan of Levitt since his return to acting and 500 Days of Summer only elevates his standing in my eyes. He's a young actor with incredible range and it will be wonderful to see him in more projects as I'm sure they will be piling up on his doorstep. This is one of my favorite performances of the year.

Deschanel is an enigma to me. She seems to always under-impress me and I can't tell if that's my fault or hers. She's good in the movie, but her doe-eyed performances always seem stiff to me. Beautiful? Obviously. Talented? Yes. Ability to deliver? Not so sure. I'm still waiting for that one performance where she completely knocks my socks off, instead of merely giving an adequate performance. Maybe, just maybe, she's so talented that her subtle nuances are lost on me. That could very well be the issue.

Final Cut: One of the year's best pictures, 500 Days of Summer is carried by a non-traditional story progression and a superb performance from Joseph Gordon-Levitt. It's hands down the best romantic comedy of the year. If you're thinking of watching The Proposal, do yourself a favor and pick up 500 Days instead. Your brain will thank you for it.

Available now on DVD and Blu-ray from Fox Searchlight Pictures