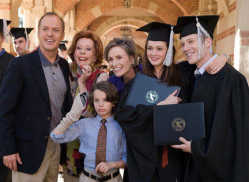 Too often we get movies depicting the plight of 20-somethings fresh out of college, struggling to find themselves in the world. "Post Grad" is perhaps the closest fictional account of what it's like to trudge through the first few months after graduation and the discoveries some find within themselves.

That being said, what "Post Grad" must rely on for its strength, ultimately proves to be the weakest element of the film.

We meet Ryden Malby (Alexis Bledel) fresh out of college and beginning to embark on what she believes to be the great journey of her life. Unfortunately, her dream job is given to her nemesis and she is forced to move back in with her parents, thus delaying her journey.

Her family is a far cry from a Norman Rockwell painting. Her father Walter (Michael Keaton), mother Carmella (Jane Lynch) and grandmother Maureen (Carol Burnett) are about as off-centered as you can get and the one constant she finds is her friend Adam (Zach Gilford).

She goes on with her life for the next few months in mediocrity until her dream job opens again and she given the chance of a lifetime. Only this time she'll be going alone because Adam has decided to attend college at Columbia. And in true romantic comedies, Ryden gives up everything and chases after the boy to find her happy ending. Oh dear, what will the feminists think of that? Boy over career -- tisk, tisk, Ryden.

Any story hinges on the believability of its lead actor, or in this case, its actress. That is where the trouble lies with this picture. Bledel just can't carry the film; it's as simple as that. She a fine actress, but in "Post Grad" her performance is a little stiff and at time unbelievable.

The two actors that are tops are Keaton and Burnett. Both have lines that are devastatingly funny and Burnett's ability to blend craziness with sincerity and heart is unsurpassed. The end scene that Keaton has with Bledel just before she leaves for Columbia provides one of the best lines in the movie and is a real "father" moment. He's an actor who is often overlooked and it's a shame.

The disc has the typical deleted scenes and the offers up some features tailor made for the film's subject matter. Know Your Strengths: Career Advice, How Not To Get a Job, A Guide to Moving Back Home and Dress for Success are just some of the bonus featurettes. The Real Life Advice with Alexis Bledel and Zach Gilford is a nice touch to the supplemental materials.

Final Cut: "Post Grad" is a movie that falls somewhere in the middle of the whole coming of age story of the 20-something generation. It's has elements that work, but it also has times where you find it very unbelievable and not true to itself.