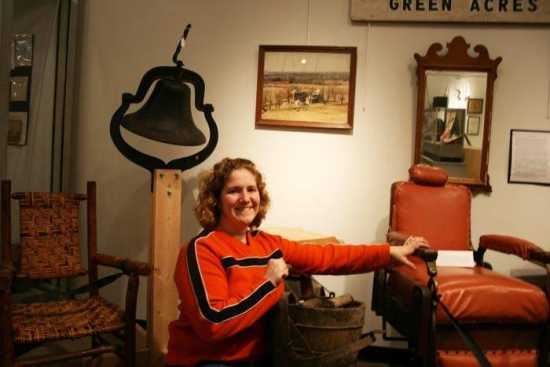 Putnam County Museum Assistant Director Tanis Monday shows off several of the items loaned to the museum by an anonymous donor. They are from the Putnam County Home known as Green Acres, which was recently sold at auction by the county.

GREENCASTLE -- What began as a self-sustaining poor farm for the destitute in Putnam County in 1870 has ended up empty and silent shell of a building.

"Oh, what tales the walls of Green Acres could tell us," said Putnam County Museum assistant director Tanis Monday. "We hope people will share their stories about the local landmark with us."

The museum has an exhibit of items from the old home donated by an anonymous person. Now museum personnel are hoping stories will bring the exhibit to life.

"If anyone has any letters, or artifacts they are willing to lend us for the exhibit, we would be grateful," added Monday.

Among the items in the display is an old barber chair, signs from the home, an antique typewriter, old mop bucket, iron bell, Bible from the 1980s and a few pieces of State Farm furniture.

"We don't want people to forget about our history. These items help us preserve some of it," said Monday.

The historic home has been a landmark in Putnam County since it was built. It was a place for people to go who could not support themselves and was tax-supported.

These "poorhouses" began as a way of providing a less expensive alternative for what is now called "welfare."

By 1875, after the regulation of poorhouses in most states became the responsibility of the State Board of Charities, laws were passed prohibiting children from residing in poorhouses and removing mentally ill patients and others with special needs to more appropriate facilities.

Rooms where mentally ill patients were housed are believed to be located in the dank and very dark basement of the building where there was no heat or ventilation.

There is also speculation over a section of the home that may have housed the county jail at one point.

Eventually the farms evolved almost exclusively into nursing homes for dependent elderly people. This is certainly the case with the Putnam County Home.

They were common in the United States beginning in the middle of the 19th century and declined in use after the Social Security Act took affect in 1935, with many disappearing completely by about 1950.

Most like Green Acres were working farms that produced at least some of the produce, grain and livestock they consumed. Residents were expected to provide labor to the extent their health would allow both in the fields and in providing housekeeping and care for other residents.

On Aug. 17, 2009, when county commissioners made their final inspection of the home, the historic building and surrounding parcels of land went to the auction block. Verlon Clark, who has been leasing the property for many years, eventually purchased the building and surrounding land. The property was sold in one plat for $565,000 and includes an area where unmarked graves are located.

This cemetery has a marker and an access road to it.

Send stories and submissions to The Putnam County Museum, 1105 N. Jackson St., Greencastle or e-mail them to museum2@co.putnam.in.us.