Stockberger lights up stage in 'The Foreigner' 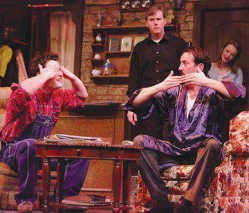 Jeff Stockberger, right, plays Charlie Baker in the title role of "The Foreigner," playing at Beef and Boards dinner theater through Feb. 7. (Courtesy of Beef and Boards)

INDIANAPOLIS -- When I first started acting in plays, one of the first things I would do when I got my script was count my lines.

That way, you see, I would be able to impress people with my mad memorization skills. When I played Countess Aurelia in "The Madwoman of Chaillot" my senior year in high school, I had something like 400 lines ... some of them paragraphs long.

The fact that I was able to be off book for those lines in less than a month, I thought, made me pretty talented.

If time, maturity and going to a lot of plays has taught me anything, it's that sometimes the most difficult roles to play are the ones without a ton of lines -- and that those roles have to be played by thespians with incredible stage presence if they're going to work.

The 2010 season at Beef & Boards dinner theater in Indianapolis recently opened with "The Foreigner," an award-winning comedy by Larry Shue. The lead role of Charlie Baker is played with stunning aplomb by Jeff Stockberger -- who, through body language, facial expressions and physicality, is able to get Charlie's points across even though he says very little a lot of the time.

The play opens with Charlie, a proper, shy and maybe even dull British fellow accompanying his pal Froggy LaSueur (played with just the right balance of gruffness and humor by Ty Stover), a military officer, on a vacation to a fishing lodge in backwoods Georgia.

Charlie is going through a tough personal time (his wife Mary -- who has had 23 dalliances with male "friends," is ill), and has come to the lodge for a three-day getaway.

Charlie just wants to be left alone. To make sure this happens, he and Froggy devise a plan whereby Charlie will pretend he is a foreigner from some exotic land who doesn't speak a word of English.

Stockberger simply lights up the stage as Charlie, a role played in the off-Broadway version by Matthew Broderick. The supporting players are all perfect in their roles, but Stockberger makes the show. Whether he is putting drinking glasses on his head, telling stories in his "native tongue" or performing impromptu dance numbers, he keeps the audience in stitches.

"The Foreigner" runs through Feb. 7, so there is still time to go catch a performance. Tickets range from $35 to $58, and include a fabulous buffet dinner.