Small businesses are the heart and soul of America. And favorites among those industries are the mom and pop restaurants we all love.

The smells of coffee, apple pie and grease mix with friendly greetings as you pass through their doors. They are the diners, the little breakfast nooks, the small town luncheonettes, the rib joints and the neighborhood delicatessens that dot the countryside.

These restaurants are more than a place to eat. They serve as a gathering place for more than just a good meal. Politics, religion and good old gossip are traded in these comfortable spots.

From the early days in Putnam County, local residents as well as DePauw students and staff found a variety of places for eating in Putnam County. Some of those old hangouts are still around in some form or other. 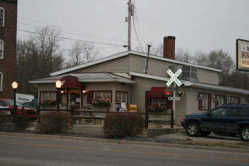 The Monon Restaurant was the first pre-fabricated building in Putnam County. It came to town on a rail car and was up in a day.

The Monon Grill has been a familiar sight for over 60 years. In 1940 when the parents of City Council member Jinsie Bingham built the Monon, it was the first pre-fabricated building in Putnam County.

"It came in on a flatcar. When folks went to work in the morning there was nothing there -- when they came home that night the building was up," said Bingham.

"My dad took his tow truck and pulled the pieces off the railroad car and put it up. I'm sure those steel walls are still underneath that building now," she added.

Bingham's mother Alpha ran the grill for several years. It was open 24 hours a day and was a community gathering place filled with regular customers.

After several years, the Scotts leased it out and eventually sold it.

The quirky 75-seat restaurant still retains the railroad theme that was the reason for its existence when the Monon railroad stopped at the once adjacent Greencastle station.

Today, Bev and Jerry Monnett own the popular diner. The building is essentially the same as when it was built of white enameled steel and fed carloads of train passengers.

It's a sweet spot, filled with antique kitchen and farm equipment hanging from the ceiling. A full-size cutout of James Dean next to an authentic jukebox greets customers as they enter the room. The homey walls are decorated with photos of stars from Shirley Temple to Clark Gable. There is train memorabilia everywhere, including a life-sized conductor dummy in a rocking chair near the cash register.

"While a police officer in the '50s and '60s, the Monon grill was the place the police had coffee at shift changes. It was open 24 hours at that time, Glen Deem and Cliff Torr, Jr. were owners at that time, oh if the walls could talk," wrote Bill Masten about the Monon on the Banner Graphic Web site.

Another beloved mom and pop restaurant is Jackson's Double Decker. It was originally located across from the Alpha Chi Omega House on Locust Street.

This eating spot was started by a man named Decker and carried on by George Williams, Chuck Phillips, Glenn Deem, and later by Bob, Bill, and Richard Jackson.

Today, the restaurant, commonly referred to as "the Double," is located at 1058 Indianapolis Rd. It offers inside dining as well as an outside drive-in. 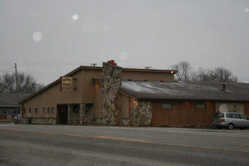 Jackson's Double Decker started out on Locust Street across from the Alpha Chi Omega House before moving to its current location on Indianapolis Rd.

It's a large restaurant with several rooms and at least three entrances. They are known for their fried chicken dinners. They offer all kinds of home-style food from meatloaf to tacos.

If you don't have time to dine inside you can pull up out back and place an order or call one ahead of time and pick it up without ever leaving your car. You can reach the Double by calling 653-4302.

In the 1950s and 1960s, Old Topper's was the most popular tavern catering to the student population. DePauw men and women flocked to this watering place on Thursday, Friday, and Saturday evenings. For a short while it included a small restaurant, the Annex, next door.

But the Annex didn't last, while the bar did.

Several years ago, local developer John Wood opened the restaurant at Old Toppers and brought fine dining to the establishment. After a few years and a couple of owners, Old Toppers Pub and Steakhouse closed again. Last fall the restaurant was revamped and began offering a new menu to patrons.

Both the pub and restaurant offer a great array of food and drink, including homemade French fries, onion rings and breaded mushrooms.

"The steaks and lasagna are also very popular. We're getting lots of repeat customers and that tells me the food is good. We have a great chef onboard."

The old establishment also offers some entertainment especially for those with a 'sixth" sense. It is rumored to be haunted.

Hoosier Paranormal recently investigated the restaurant looking for signs of a ghost known to frequent the spot. The story behind the investigation is that several years ago when a regular customer at the bar passed away he requested that his funeral procession pass by the restaurant and that the hearse stop in front of the building for several minutes. Staff members opened the front and back doors as requested previously by the deceased. Ever since, there has been paranormal activity reported in the restaurant.

One of the investigators had his shoelaces untied and lifted up in the air. Another investigator watched it happening as well.

The Bon Ton Restaurant in Bainbridge will celebrate its 75th birthday on Jan. 24, 2011. Gene Hess opened the Bon Ton in January 1936. At that time, Bainbridge had a lot of traffic running through the town on U.S. 36.

In those days, the restaurant was an old trolley car and was open 24 hours a day. Business was brisk, with the restaurant filled daily with local residents and many travelers.

In 1945, Hess sold his business to a fellow who worked for him. The trolley car burned in 1947. Hess, who was then in the construction business, built the building where the Bon Ton now stands, and the restaurant was back in business.

But, as with so many small town businesses along state highways where the traffic moved to the interstates, business at the Bon Ton fell off. When it appeared that the Bon Ton was closing, there was an outcry among Bainbridge residents to keep the restaurant open.

Putnam County residents Mark and Sue Blake took over running the restaurant after it went on the auction block two years ago. The Blakes' relatives purchased the Bon Ton but knew they didn't want to run a restaurant. They offered it to Mark and Sue, who had both worked in restaurant management and wanted to get back to it.

Homemade pies are one of their specialties. They also offer homemade meals of fried chicken on Sundays and fried catfish on Friday nights. They have a breakfast menu that includes everyone's favorite morning foods with items like biscuits and gravy, eggs and bacon, sausage and hotcakes.

Their lunch menu has meatloaf and beef manhattans and all the standard sandwiches. Some people say the star of the Bon Ton is their Bon Ton Deluxe Special. Others insist it is the delicious, baked fresh everyday, homemade pies. They even offer sugar free pies. The Bon Ton is located at 110 W. Pat Rady Way (U.S. 36), Bainbridge. They can be reached at 522-3221.

In a world filled with franchise restaurants (and there is nothing wrong with those), there are many folks who prefer the simple ambiance and warmth of the mom and pop restaurants, where customers are often greeted by name.

Because places like these little spots still exist, another generation of folks can experience the delights of the mom and pop restaurants.

Comments
View 34 comments
Note: The nature of the Internet makes it impractical for our staff to review every comment. Please note that those who post comments on this website may do so using a screen name, which may or may not reflect a website user's actual name. Readers should be careful not to assign comments to real people who may have names similar to screen names. Refrain from obscenity in your comments, and to keep discussions civil, don't say anything in a way your grandmother would be ashamed to read.
Respond to this story