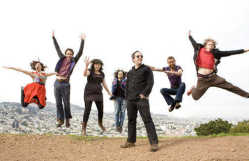 San Francisco-based band Citay released "Dream Get Together" Jan. 26 on Dead Oceans. The group will be in concert at the Bishop in Bloomington on March 27. (Photo by LYDIA DANILLER)

Citay's music doesn't so much sound like it comes from a different era as it feels like it. It doesn't really sound like the long, experimental work that hard rock guitarists from the 1960s through the 1980s espoused, but this band could have thrived in those environments.

In the current musical climate, one doesn't find much in the way of sprawling, guitar-based instrumentals. That's too band because this band soars on these flights of fancy like few others can.

And so we get "Dream Get Together," released Jan. 26 on Bloomington-based Dean Oceans. Weighing in at eight tracks and just 42 minutes, the album plays like something from the past. I've only had the chance to listen to it on CD, but this thing must sound outstanding on LP. (Good news, vinyl lovers, it is available on a 12" record.)

The record is one that will chiefly appeal to guitar players and guitar lovers. Vocals are used sparingly (but effectively) as the album creates a mood more than tells a story.

Founders Ezra Feinberg and Tim Green have assembled a team of 11 crack musicians who contribute to the record to various degrees. The results is a product that's light and triumphant one moment then dark and heavy the next.

Vocals, though limited even on the five tracks they are featured, bring a crisp optimism to the music. When Pitchfork Media described the band's music as "psychedelic pop-rock" in 2007, the pop-rock description no doubt sprung the vocals.

"Careful With That Hat" is a perfect choice to lead off the album, conveying the energy and triumph the listener will experience throughout the album.

After the interlude "Return From Silence," the title track slows the pace slightly, but basically carries the banner of the opener. Late in the album, "Fortunate Sun" matches the joy of the opening tracks.

At the darker end of the spectrum, the instrumental "Hunter" is very much '80s-inspired, with its interplay of heavy electric guitar and synthesizer. "Secret Breakfast" is another quality instrumental.

And after all the ups and downs of the album, Feinberg calms it down nicely with the acoustic guitar-based "Tugboat." This final track feels like a soft landing after a cross-country flight.

Citay has put together a nice album on "Dream Get Together." While the music may lack universal appeal, it will be an absolute joy to the right listeners.

Lovers of quality guitar work and musicianship in general should give it a spin, as should anyone interested in music that speaks volumes with few words.

And for those mildly interested, try downloading "Careful With That Hat," "Hunter" and "Tugboat" for a taste of the different directions this record can take. You might just find something you like.

Citay, Dream Get Together