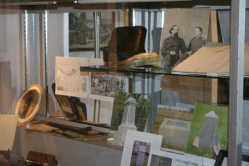 The picture at the upper right of drug store owner Col. Eli Lilly is featured in a Civil War exhibit at the Putnam County Museum. Lilly led a unit of soldiers from Putnam County during the Civil War. Lilly himself never returned to live in the county after the war.

GREENCASTLE -- Putnam County has many historic connections to the Civil War. From Eli Lilly, the founder of the large pharmaceutical company who left his Greencastle drug store to form his own unit of solders to the many students from Indiana Asbury University (later DePauw) to a number of local county residents.

On Feb. 12, the Putnam County Museum will open a Civil War exhibit featuring four sections of exhibits. It starts with the "gathering storm" and moves to "marching off to war" followed by "lookout at home" and concluding with "remembering the Civil War."

DePauw junior and Greencastle High School graduate Tyler Archer is curator of the exhibit. He will give tours of the exhibit during a special reception on Feb. 12 from 4 to 6 p.m. The reception is open to the public.

"There were many contributors to the war from Putnam County residents that many people probably aren't aware of, but they were pretty significant," said Archer in an article on the DePauw University Web site. 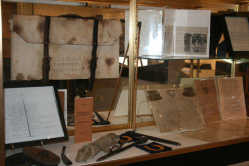 A Farriers' bag and different types of equipment issued by the Army for the car of horses takes up a case in the Putnam County Museum's Civil War exhibit.

Items in the exhibit include a grouping of farrier equipment, pictures, letters and diaries from local soldiers, Civil War era weapons, confederate money, bill of sale for a slave and much, much more.

"There is more Union than Confederate information in the exhibit because there was more sympathy for the Union in the county," explained museum director Tanis Monday.

Sketches by E.E. Edwards, a graduate of Indiana Asbury University made while he was a captain in the cavalry, depict some of the true scenes of this bloody war.

Also featured in the exhibit is a bill of sale from a Putnamville family who inherited their relative's slaves. The bill shows the slaves were sold to someone in Ballard County, Ky.

"Obviously, they didn't want to own slaves here in Indiana, so they sold them," said Monday.

A major highlight is an 1864 map of Putnam County showing all the small communities and townships.

Another item is a flute captured from a confederate soldier by Aden Cavins, another Indiana Asbury University student serving for the Union.

Members of the Civil War Roundtable will hold their meeting at the Museum during the exhibit that will run through June. On Feb. 23, a group of DePauw University students will present a program on the Civil War. Other events are also planned.

"We've had a great response from the community, who loaned many items with Putnam County ties. We really appreciate them all," said Monday. 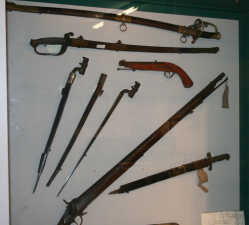 Civil War era weapons are just a small part of a new exhibit opening at the Putnam County Museum Feb. 12.

For information about the exhibit call the Museum at 653-8419 or visit their Web sit at www.putnamcountymuseum.org. The Putnam County Museum is located at 1105 N. Jackson Street in Greencastle.