'Surrogates' an out of body experience to forget 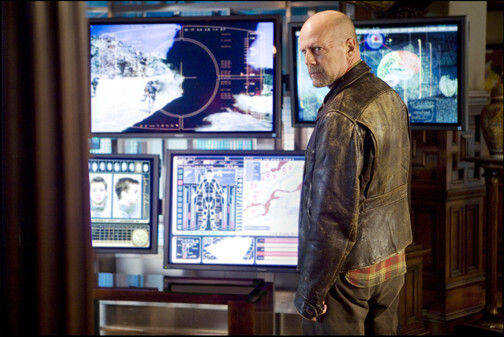 How many times have you seen it? A film with a big name star, a cool premise and then it all falls apart due to the script. In "Surrogates," starring Bruce Willis, that is the progression that ultimately spells doom for this futuristic thriller.

This is a story custom-built for a sci-fi geek. It's set in the future, we've essentially given over control to robotic versions of who we desire to be and we live wonderful lives in quiet isolation from the world. The bad news is, these stories rarely work out.

Set in a time where we explore the world through our surrogate, everything is futuristic bliss until humans begin dying through said surrogate. That's when it's time for Willis to step in.

With deaths popping up here and there, Tom Greer (Willis) narrowly misses becoming a statistic and decides to tackle his brave new world without a surrogate in hopes of finding who is responsible for the device that has made it possible to kill a person through their surrogate.

As you might guess, he encounters ridiculous resistance from The Prophet, a heavily bearded Ving Rhames, all the while trying to help mend his marriage to a wife who can't overcome the loss of their son.

The film does have few key scenes that are noteworthy, but it sets out on one journey and then finds itself chasing its own tail. I liked everything about the movie, but it wasn't able to realize its full potential. I found it to be herky, jerky more times than not.

The fault lies in the script. It lays many things out on the table that are appealing, but it only gives us a few to play with, leaving a bad taste in your mouth. The flick offers up some very cool ideas about where we could be heading, but as in so many sci-fi based films, they stray from what is the strength.

The filmmakers could have tightened the film by giving us a little info about the fate of Greer's son, a little of the struggles his wife has with it and leave it at that. It would have been more than enough to help the story. Instead, we have the scene were Greer lays it on the line to his wife, only for her to 'switch off.' If only I had a nickel for every time that happened to me -- If only.

Final Cut: Although it's an interesting watch, Surrogates just doesn't have enough magic to make it a must see.