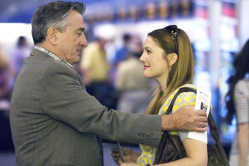 The movies that seem to affect us most are the ones that speak to us on a personal level. The ones that mirror the events of our lives and help bring a perspective that we might have overlooked as we've watched our own movie called life play out. Robert De Niro's latest film "Everybody's Fine" is just such a film.

Frank Goode (De Niro) is still coping with the loss of his wife eight month earlier and now it's time for his four children to come home for a visit. The backyard is set; he's bought a new grill and everything's ready for his children's return. But, one by one, they call to cancel and now Frank's set to spend the time alone.

Frank decides to drop in on each of his children unannounced and against doctor's orders he begins prepping for his departure. Frank suffers from a lung ailment he got from years of working on PVC covered phone cables and his doctor advises him to take it easy. Not a man to be told what to do, Frank sets out for New York.

His son David doesn't answer his door in New York and after a short time; Frank decides to carry on with his journey. He slips one of four envelopes he's brought on his trip, one for each of his children, under David's door and leaves.

As he makes his stops, it slowly becomes apparent that each of his children are hiding secrets of their own, as well as one collective secret that they conspire to keep from their father.

Before arriving at his daughter Rosie's (Drew Barrymore) apartment in Las Vegas, an act of good nature turns on Frank and he's attack by a mugger who smashes his pills for his lung condition, essentially cutting his trip short.

On his return trip home, Frank suffers a heart attack while on a plane and as they rush him off the plane, he slips into an unconscious state where child incarnations of his children are sitting with him around a picnic table in his backyard. He confronts each of them about their lies, to which each but David comes clean.

When he awakes Rosie, Amy (Kate Beckinsale) and Robert (Sam Rockwell) are standing by his bedside. He quickly jokes that he's finally got them all together. He notices David is missing from the group and when he presses his children about his absence, they inform him that his son died in Mexico of an apparent drug overdose, causing Frank to break down.

It's learned through the course of events that Frank pushed his children to succeed in their youth and it seems that David might have felt the pressure more than the others. During the night, Frank has a dream and talks with David as a child. The two, for the first time in their lives, find common ground and Frank finally accepts David for what he is.

After his recovery, Frank goes back to the neighborhood where he saw David's painting hanging in gallery in hopes of buying it. He's told it's sold, but is told there might be something of David's in storage. A young woman at the gallery finds his painting and when it's unveiled, it shows a landscape scene with curling telephone wires.

The films ends tidy enough as all of his children are home for Christmas, sitting around the table, while David's painting hangs close by.

While the characters have their flaws, the overall power of the film draws from us projecting our regrets and little guilts on the screen as well.

De Niro, Beckinsale, Rockwell and Barrymore all give worthy performances in a film where believability in the characters is crucial. De Niro is able to carry the hurt and anguish with a dignity that few actors have the guts to pull off.

The only element of the film that became tiresome was the use of the wires Frank created. Director Kirk Jones cleverly uses the lines to support the voice over narration of the children keeping their secret from their father. However, Jones overuses the element and it loses some of its power. He also lingers too long on a few scenes, but overall is a satisfying film.

A few deleted scenes and extended scenes, as well as a making of Paul McCartney's "(I Want to) Come Home" featurette is the only bonus features the DVD has.

Final Cut: A surprisingly powerful drama that explores the defunct family dynamic and reveals to us the importance of now when dealing with our loved ones. The film will affect you depending on your stage in life, but for the ones it hits home for, it hits like a sledgehammer.