A quarter century of service 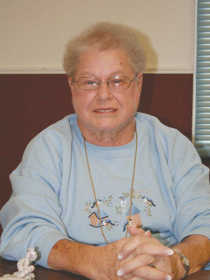 Thelma Bumgardner has been Greencastle Township Trustee since December 1984.
Order this photo

Bumgardner will not seek seventh term as trustee

GREENCASTLE -- When she was appointed Greencastle Township trustee in December 1984, Thelma Bumgardner never would have guessed she would stay in office for 25 years.

Bumgardner was appointed to fill a vacancy when the previous trustee resigned, and went on to be elected to six terms in the office.

She has decided she will not seek a seventh.

"I thought 25 years was long enough and someone else could take over," she said.

Bumgardner, a lifelong Greencastle resident who attended Jones Elementary School and graduated from Greencastle High School in 1957, ended up in the office by complete chance. She volunteered to serve on the committee that was reviewing applications for the vacancy in 1984, and decided she would throw her hat in the ring.

"Then they selected me to take the job," she said.

"That first year, I felt like I was wearing a blindfold going in," she said. "I had to learn and be taught a lot of things by my constituents and by officials from the state."

Township trustees take on a wide variety of responsibilities. The main one is administering poor relief in the form of assistance with utility, medical and rent payments. They also arrange pauper burials.

"Sometimes I've helped generations of the same families," she said. "I think these agencies that help people can become kind of a luxury. I've tried to help people get back on their feet; to maybe be a counselor for them."

In the many years she has been a trustee, Bumgardner has seen the people of the community go through rough times.

"It's been worse this past year than it has been any other time since I've been in this job," she said.

After she leaves office at the end of the year, Bumgardner said she will likely concentrate on volunteer work. She volunteers at the Emergency Food Pantry and serves on the executive board of the Putnam County Senior Center.

She also plans on spending more time with her husband of 53 years, Willard, who has been retired from Cardinal Contractors in Indianapolis for nearly 10 years, as well as with her two children six grandchildren and five great-granddaughters.

"She'll be busy," said Linda Gregory, who has served as Bumgardner's deputy trustee for 23 years.

Bumgardner, 70, looks back on her two-and-a-half decades of service to Greencastle Township with great fondness.

"I've enjoyed my job," she said. "I've liked working with the people from the county, the city and the state. I hope people think I've done my job well."

And is there anything she's not going to be sad about leaving behind?

Her advice for the person who will take her place -- whoever he or she may be -- is to keep a sense of humor, maintain communication and to be patient.

"You really have to want to be that person who wants to help other people," she said. "It's a big job. You don't always agree with everyone, but you do the best you can. That's all I've ever tried to do."

"I'd really like to thank all of the other township trustees and advisory board members I've worked with over the years," she said. "I've enjoyed working with all of them."