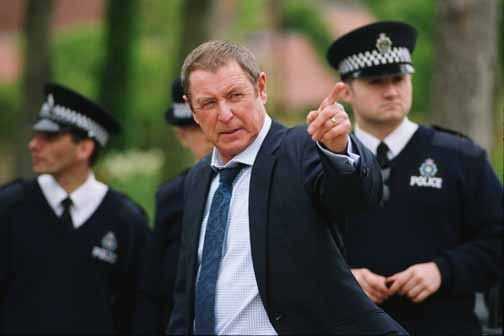 Being a fan of British television, anytime I get a chance to indulge myself, I seize it. Recently Acorn Media released Midsomer Murders: Set 14, The Rivals of Sherlock Holmes, Legacy: The Origins of Civilization and G.B.H.

This is by far one of my favorite new discoveries. It's a great mystery series that is slow, methodical and character-driven.

The series revolves around Tom Barnaby (John Nettles) and Ben Jones (Jason Hughes) and the happenings in the village of Midsomer. This installment of the show includes Death and Dust, Picture of Innocence, They Seek Him Here and Death in a Chocolate Box.

My favorite episode in this set is Picture of Innocence. When photographer Lionel Bell (Nigel Anthony) is found strangled, Barnaby becomes the prime suspect in the crime. He's dismissed from the case by Martin Spellman (Richard Lintern); Barnaby begins his own investigation to the find the real killer.

Midsomer Murders is a charming mystery series that offers more entertainment than any similar show we have here in the States.

The Rivals of Sherlock Holmes

This series debuted in the early 1970s and it hasn't aged well. The show is comprised of adaptations of detective stories from Sir Arthur Conan Doyle's contemporaries, but it's a rough watch.

It was a public television anthology, but its video presentation really detracts from the series. The 13 episodes have their moments of watchability, but overall I found the series very underwhelming.

Legacy: The Origins of Civilization

For the history geek in all of us, this is a must. The DVD traces the origins of six civilizations (Iraq, India, China, Egypt, Central America and Europe) and explores what makes each special and its impact on history.

Michael Wood presents the series, and with 11 books and dozens of documentaries to his name, the man knows his stuff.

The biggest question posted in 'Legacy' is "What can we learn from the past?" and the question couldn't be timelier. It also comes with a 20-page viewers guide.

'Legacy: The Origins of Civilization' is a six-episode set that begins in Iraq and culminates in Europe. If history isn't your thing, I suggest passing this up. If it is, this is a very intriguing series that explores varying cultures and is a nice watch

Most of the time when you think of Michael Palin, your mind instantly goes to his zany antics with Monty Python. In "G.B.H.", you'll find a different Palin, but one that is equally entertaining.

'G.B.H.' is the tale of a strike and a school headmaster who inadvertently sabotages it. Robert Lindsay is a corrupt labor party leader Michael Murray and Palin stars as the principled Jim Nelson. The two instantly become foes, with each having their own dysfunctions. Murray is hiding a tormented past, while Nelson suffers from severe anxiety attacks.

What makes the series extremely cool, though, is its ability to tackle scenes with a serious face and at the same time, be as funny as heck. Palin and Lindsay are superb.

Final Cut: I highly recommend picking up Midsomer Murders: Set 14, Legacy: The Origins of Civilization and G.B.H. and implore you to stay away from 'The Rivals of Sherlock Holmes'. You'll find, like I have, that in many aspects, British television is superior to what we have. The trio provides some nice watching.

All titles are available from Acorn Media