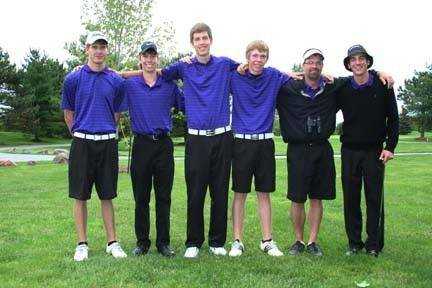 CLAYTON -- For the third time in as many years, it was the GHS Tiger Cubs who strode away from Deer Creek Golf Course with the West Central Conference Championship to their name. As with last year, the 2010 tournament was a wet one, but the golfers prevailed and posted some nice scores.

Greencastle won the tournament with a team total 325 powered by two sub-80 performances from Jimmy Wheeler and Brad Haussin. Wheeler was the low county scorer with a 78; with Haussin right on his heels a 79. Ray Stinson shot an 83 for GHS, while Eric Embry carded an 85 and Tyler Hopkins came in with an 89.

Haussin bounced back from a shaky performance at the county match and acknowledged that following the match. The sophomore golfer also indicated following the round, the win was more than just about two players. 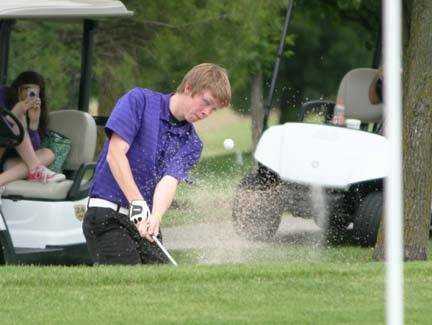 Jimmy Wheeler pokes a shot out of the sand on the ninth hole at Deer Creek Golf Course Saturday. Wheeler led the Tiger Cubs with a county-low round of 78.

"Yeah, for the most part," Haussin said about feeling good about Saturday's round. "The course played fairly well. The greens were a little faster than before and we played solid as a team all-round."

Asked about his feelings regarding the win, Haussin once again alluded to the team and their better than fair chances of making it out of sectional.

"It feels great. It's a big confidence booster for sectional too. We've got an all-around team here and we definitely have a chance of advancing in sectional," Haussin commented.

Wheeler, Haussin, Stinson and Embry were honored as All-WCC on the day.

The Cloverdale Clovers were third on the day with a total of 361, with Chris Arnold and Gary Williams leading the way. Arnold shot an 80 after a tough first nine and Williams delivered a steady 85 for the Clovers.

Head coach Doug Wokoun was pleased with the duo's performance Saturday and their ability to bounce back.

"We were pleased with two all conference players," Wokoun said. "Chris struggled through the front nine but battled back with a great back nine. Gary played very well and was steady throughout the round. They both minimized mistakes and had only one bad hole. They did not let distractions interfere, which is the mark of a good player."

Cloverdale strikers Sam Jordan, Alex Evans and Colte Tomlinson had rough days. In spite of the elevated score, Wokoun is confident they can bounce back and do some nice things in weeks to come.

"Sam and Alex struggled through and had to make recoveries frequently. They are both much better players than their rounds on Saturday and that is frustrating. They both continued to battle and played the last few holes well. Colte was playing in his first big event and had some good holes. He is only a sophomore and learned quite a bit about himself and tournament golf. Hopefully as we move forward those experiences will make him more consistent," Wokoun said.

After nine holes, the South Putnam Eagles were in prime position to make a little noise at conference, but the rains set in and their scores on the back nine climbed. Dean Varvel and Alex Kelly were the only Eagles golfers to post lower back nine scores. The team placed fourth with a total of 366

Overall, Dylan Gilbert led the way with an 88, followed by an 89 from Kelly. Varvel shot a 91, Alex Eickhoff a 98 and Mike Nichols shot a 100. Head coach Brian McClure liked what he saw at the beginning, but noted his team needs to learn to play a full 18-holes mentally.

"I couldn't have been happier after nine holes, we were in very good position," McClure reiterated. "On that nine holes, it was the lowest we've shot on nine holes on the road on a tough course. We were in good shape, we just didn't finish it. We didn't finish off the round -- we gave away a lot of shots on the back nine. I think we ended up in fourth place, which is good, it's an improvement, better than last year, but we still have work to do.

"(It was a) good start. We hit a lot of good shots on the front nine, but we just have to be able to finish the round. Mentally we have to be ready to play 18-holes and I don't think we're there yet to play 18-holes. It's a little frustrating," he added.

For North Putnam head coach Nathan Martindale, he hopes that Saturday was a learning experience. He acknowledged the tough conditions as a possible factor, but thought that getting an 18-hole tournament under their belts was a great benefit to his team.

"We had a rough day," Martindale said. "We had some unfortunate bounces that didn't go our way, penalties -- we left a lot of shots out there. But, for a couple of these freshmen that I have, and a couple of underclassmen I have, it was a good experience for them. They had to play in some difficult conditions with the rain and the rough was playing pretty thick today, so it was an experience for them that they will use for next year.

"As far as the scoring goes today, I'm not really happy with it, but it's something they can learn from so that's good," he added.

Colton Smith led the Cougars in scoring with a 96 as Jon Willard posted a 99. Brandon Volland shot a 100 for North Putnam, with Wes Detienne adding a 102 and Lance Clodfelter shooting a 108.

Instead of sending the golfers out on different holes, the golfers teed off on the first hole, which resulted in a big wait for the final golfers to head out. Martindale said that, too, made for a tough situation for the kids playing on Saturday.

"Some of these guys, I know our two freshmen, have only been to one invite besides this, an 18-hole tournament, so for them it's just another experience of playing an 18-hole tournament on a Saturday. They had a long wait -- our fives had to wait once we got here for tee time, so it's kind of difficult for them to come out in these conditions, especially that young.

Wokoun also commented on the conditions and commended the Tiger Cubs for a match well played.

"Even though the weather was not ideal, the course was in pretty good shape and we can only look at ourselves in assessing our efforts," Wokoun said. "After the county on Thursday, we thought we could come in and be competitive for a championship, but we did not have our best effort, and Greencastle had some excellent efforts to separate themselves."