From fair queen to 500 princess 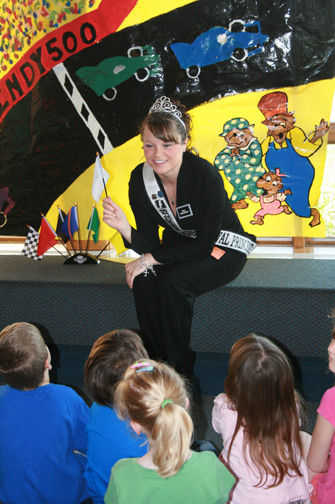 Indianapolis 500 Festival Princess Tara Thornburg, a native of Russellville, speaks to a group of kindergartners at Bainbridge Elementary on Friday.

Thornburg returns to her roots with new title

BAINBRIDGE -- Excitement was thick in the air Friday morning at Bainbridge Elementary School.

The students weren't quite sure what it meant, but they knew there was a pretty lady wearing a crown walking the halls. They had also noticed a shiny, bright orange Camaro bearing the Indianapolis 500 logo parked at the curb in front of the school's entrance.

They knew something special was going to happen.

And indeed it did, as Indianapolis 500 Festival Princess Tara Thornburg, a former Putnam County 4-H Fair queen and 2006 North Putnam High School graduate, gave kindergartners at the school a presentation on the Indianapolis 500, read them a book and showed them this year's Indianapolis 500 pace car up close and personal.

Thornburg did her presentation for several groups of children. With each group, she asked the children to introduce themselves and called them by their first names.

"You're so pretty," one little girl said shyly.

"Thank you so much," she said.

Thornburg proceeded to show the students small replicas of the flags used during the Indianapolis 500, asking if they knew what the flags meant. Even when the students didn't come up with the right answers, Thornburg praised them for trying and complimented them on their good guesses.

"I'm going to stick around Indiana, and I plan on coming back to this area eventually and staying in the community," Thornburg said with a smile.

Competition for the 33 princess spots at the 500 Festival is fierce.

Each year, hundreds of young women aged 19-23 from across the state apply to be 500 Festival princesses. Princess selection is based on personal projection, motivation and commitment. Criteria include poise and appearance, interpersonal communication skills, volunteerism, maturity and responsibility and academic achievement. An expert panel of independent judges interviews all princess candidates in late January, and 66 candidates go on to a second round of interviews in early February.

The final 33 are selected that day, and all candidates are notified by e-mail the following week as to whether they have been selected as a 500 Festival princess. 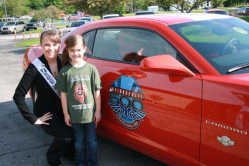 Candidates are also required to include character references from professional contacts with their applications. They must be involved in at least one extracurricular college of community service activity.

Once the 33 princesses are selected, a queen is chosen from among them. All the princesses make two to three minute speeches about themselves at a 500 Festival Princess Reception in April. This counts as a public speaking competition and is used as criteria for choosing the queen.

The princesses must be available for all 500 Festival events during the month of May, unless they are graduating. They are required to participate in 500 Festival statewide outreach initiatives in their hometowns as well as to serve at required events and social functions associated with the 500 Festival.

Thornburg came to Bainbridge Elementary and then went to Roachdale Elementary on Friday as part of the community outreach requirement of her 500 Festival princess title.

"Some of the girls have done Race for the Cure; we've all done a bunch of different things," she said. "We did a blitz build for Habitat for Humanity and we've been to Riley (Hospital for Children in Indianapolis).

The 500 Festival Queen will be announced May 22 at the Brickyard Breakfast. Thornburg was humble when she talked about her chances of being chosen.

"There are 32 other girls who are just as good and just as qualified as I am," she said. "The queen gets the scholarship and the limelight, but as princesses I feel like we've already gotten to do everything along the way. We've made network contacts that are out of this world."

Thornburg paused to watch a second group of kindergartners file into the front lobby and sit down, waiting for her to give her presentation.

She paused and smiled, surveying the room filled with small, innocent, excited faces.