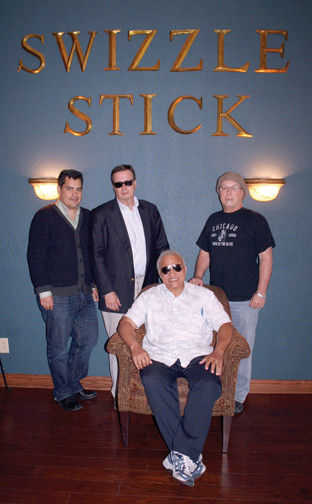 Blues Side Up members Alex Puga, Rick Provine, Jonathan January and Steve St. Pierre have released their debut "Grey" and will be playing a CD release party at the Swizzle Stick Friday.

GREENCASTLE -- Anyone who spent this last winter in Indiana should easily relate to "Had My Fill," the first song of Blues Side Up's EP "Grey." The song is simply about being tired of cold weather and being ready to head south.

The connection only makes sense, though, as it was written by local musicians Jonathan January and Steve St. Pierre. On one particularly cold day, the duo got together to practice and St. Pierre struggled to play guitar, his hands were so cold.

One of them said, "I've had my fill," and the song took off from there. Between complaining about the cold and talking about going south to play music, January was able to fill the song with fun lyrics.

But this band isn't just about the collaboration between St. Pierre and January. The complete lineup of the band is St. Pierre on guitars, January on vocals and bass guitar, Alejandro "Alex" Puga on harmonicas and Rick Provine on drums and percussion.

All four are local residents who are glad they've hooked up for this ensemble.

"We've all admired each other's playing for years," January said.

"Jonathan and I have been kicking this around in one version or another for years -- doing a project like this," St. Pierre said.

In various incarnations of various bands, all four have played in the same circles, but it took a chance encounter St. Pierre had to get things going.

Several years ago, St. Pierre had the chance to spend some time, playing and talking with George Marinelli -- best known as guitarist for Bonnie Raitt, as well as an original member of Bruce Hornsby and The Range.

Marinelli liked what he heard, and stayed in touch with St. Pierre.

"He kept suggesting that I should do something with the riffs I played for him, and he said his studio would be available," St. Pierre said.

As St. Pierre tried to assemble Blues Side Up, the others were understandably dubious.

"I told Jonathan a long time ago that I was friends with Marinelli and we had the capabilities of putting something together and have him record it," St. Pierre said.

"I think Rick thought I was crazy," he added.

"Well, yeah, how many times do you hear someone say something like that?" Provine replied.

"The only time I thought you were crazy was when said you were going to have a session with Reese Wynans," Puga said. "It's funny that we all knew the same way to 'just humor the crazy guy.'"

But St. Pierre wasn't crazy. In April, the band took a trip to Nashville, Tenn. to record in Marinelli's studio. Besides Marinelli's production, Wynans, who was a member of Stevie Ray Vaughan's Double Trouble, played the Hammond B3 and keyboards on the five tracks.

Marinelli and Wynans play together in the Purifiers, so the connection paid big dividends. Wynans, through Marinelli, agreed to do the sessions for much less than he would normally charge.

"It was all really due to George," St. Pierre said.

All four members were overjoyed to be working with such accomplished players.

"That was the highlight of the whole thing -- watching Reese," Provine said.

As impressive as they might have been, neither Marinelli nor Wynans threw his weight around.

"Reese and George could have had egos, but they didn't," January said. "They were humble, helpful, encouraging. I was just happy they were interested."

"Marinelli spent a lot of time that he didn't have to on it, and so did Reese. They were impressed," St. Pierre said. "What's really cool is he (Marinelli) is playing our stuff for people down there."

For all that Wynans and Marinelli brought to the project, though, it was a quality set of tunes that first attracted them to the project. Four of the five tracks were co-written by January and St. Pierre.

"Steve had the music ideas, and I mainly had to come up with the lyrics," January said. "It was just really what I wanted to say. I've always loved to write poetry. It's just about taking phrases and making them fit."

While Provine and Puga don't get writing credits on the songs, their playing certainly had a big influence on the compositions.

"A lot of Alex's creative juices helped get this flowing," St. Pierre said.

January and St. Pierre specifically credit Provine's drumming with the final form "Help Your Brother" took. It started as a song January had written about Hurricane Katrina with St. Pierre bringing some guitar ideas.

"We were just jamming, but Rick's drumming really brought it together," January said.

This is really the essence of what brought these guys together -- they respect each other and love seeing what the others bring to the table.

"We're not blues purists, but there's a lot of blues to it," January said. "Blues is about call and response, and that's what I love about playing in this band."

"One thing that's nice about this band is the dynamic we have in the short time we've played together," St. Pierre said. "We normally don't step on each other's toes."

Puga also likes the spirit of community cooperation the band displays. Puga is a Spanish professor at DePauw, while Provine is DePauw's director of libraries.

"The thing I like is it's 50-50 town and gown," he said. "It's a great example of how relationships can be formed from a point of interest."

One can only hope this band becomes a point of interest for more of the community.

Blues Side Up's "Grey" is another example of the outstanding art being produced right here in our backyard.

"Had My Fill," "This Wild Life" and the Jimmy Rodgers cover "My Last Meal" are great examples of how much fun the blues can be. "Help Your Brother" shows the social consciousness that same music can have.

The instrumental "Steve's Shuffle" is simply and example of what amazing musicians these guys are.

Even for such a short disc, the collection is impressively varied.

"What I like is that they're all different," Provine said. "That made it interesting to play on."

So buy local, and check this disc out. Besides being available at this Friday's CD release party at the Swizzle Stick, it can be purchased on iTunes, CDBaby.com and Amazon.com.

Blues Side Up, Grey