Cloverdale holds off Bulldogs in opener 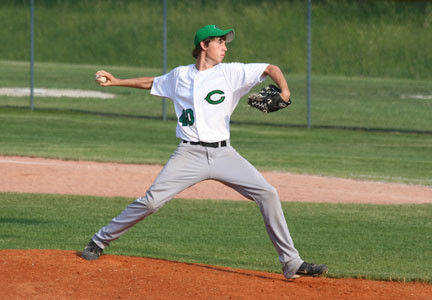 Cloverdale pitcher Kyle Martin went eight innings for the Clovers, getting the win in his team's 7-6 sectional victory over Monrovia.

After rain delayed their sectional matchup with Monrovia twice in the bottom of the eighth inning, the Clovers brought four men to the plate. Each one reached base on the way to a 7-6 come-from-behind win over the Bulldogs.

Brian Dale drove in Frank Skiles to tie the score at six, then Ethan Atwood scored on an error off the bat of William Whitinger for the victory.

Asked if he'd had any words of wisdom during the delays, Coach Bryan Archer said he just had a good feeling if Atwood just reached base.

"During the first delay, the coaches and I were talking, and we talked to Ethan and said, 'You get on any way you can -- be smart at the plate and if you get a good pitch drive it. If you get on, you will be the winning run,'" Archer said.

Following the delay, Bulldog reliever Jeremy Gray didn't return with his best stuff, and walked Atwood. Following the at-bat, the teams were again called off the field for another lightning strike.

When they returned, the Clovers really had Gray's number. Left-hander Jordan Brinkman went opposite field and sent a hot grounder to left field to load the bases.

Brian Dale came next with a blooper to right to score Skiles and knot the game at six.

"That was really the best situation we could have asked for to have Frankie and Ethan on base with Brinkman and Brian up," Archer said. "We couldn't ask for a better situation.

Next came a big question mark for the Clovers, in the form of the cleanup spot originally occupied by Jeff Dale. Archer had pinch run for the senior in the fifth, though, and replaced him with William Whitinger. The sophomore was already 1-for-1, and the coach had confidence in him.

"I told him, 'I wouldn't have you in here if I didn't have complete confidence in you,'" Archer said. "He hasn't gotten to play as much as maybe he should have, but I told him right after the game, 'All those days in the cage, all those games you did not play and kept with it and kept coming to the early morning hitting sessions -- that paid off.'"

Whitinger sent a ball to the gap between short and third. Shortstop Dalin Gray got his glove on the ball, but it caromed into the outfield.

Brinkman trotted home for the victory.

Of the five players who reached base in the eighth, Skiles is a junior and the other four are sophomores.

"To have four sophomores step up like that in a big game, that says a lot about them and hopefully a lot for the future," Archer said.

Of course, the bottom of the eighth wasn't the entire game for the Clovers. At one point, they'd had a 5-2 advantage before the Bulldogs started clawing back. It was an all-too-familiar situation.

The Clovers had led Rockville 5-1 in the seventh on Tuesday, only to lose the game.

"Tonight we didn't want that to happen again, and it didn't, due to our defense. But I'm the most impressed with them battling back and getting the win. That's a great job," the coach said.

Monrovia got things started in the first, hitting Clover starter Kyle Martin with three singles and a pair of fielder's choices. Andrew Rhyner plated Dean Reeves and Jeremy Gray with a single, making it 2-0.

The Clovers answered quickly, though, bringing eight men to the plate against Rhyner in the bottom of the first. Brian Dale drove in Atwood, then Josh Burdette tied the score, driving in Dale. Brody Pfaff scored on a Martin single, making it 3-2 after one.

It was only a great, diving tag by Monrovia catcher Reeves that kept the Clovers from pouring more on in the opening frame.

From there, Martin was locked in, not allowing another base runner until the fifth.

Cloverdale tacked on a run each in the third and fourth, with RBIs from Burdette and Then Monrovia began mount its charge.

Martin walked the first two men to the plate in the fifth. The first of these, Zach Fite, was driven in by Dalin Gray.

In the seventh, down to their last out, the Bulldogs mounted an impressive rally. With Reeves already on base after a fielder's choice, Robby Marley, Jeremy Gray and Ryner hit consecutive singles, with Rhyner's scoring Reeves and Marley.

With the score now tied, even the final out, a deep fly ball to center from Grant Benefiel, looked threatening.

Although he looked to be gassed, Martin kept battling.

"Martin has thrown two games now where he's gone into the eighth," Archer said. "When he gets to the sixth, seventh inning, I ask him, 'How are you feeling? You want to go?' and every time he looks me straight in the eye and says, 'I can do it. I want it.' I'm not going to deny him. If he wants the ball, he's going to get the ball."

In the top of the eighth, it looked like the Clovers' second error of the game would cost them the season. With two outs and Travis Buttler and Dalin Gray on base, Reeves laid down a bunt. The ball got past Martin, but second baseman Shawn Shipp fielded it and made an ill-advised diving throw.

The ball sailed over Whitinger's head, and Buttler scored the go-ahead run on the error.

Although it took the Clovers an hour-and-a-half to answer, they got the last laugh with their own extra-inning heroics.

"It was a crazy game," Archer said.

Martin finished with the win, pitching eight innings and giving up six runs on 10 hits, two walks and two hit batsmen. He struck out three.

"I told (Martin) Tuesday, 'You're going to take it easy until Thursday and your job is going to be pitching against Monrovia. Not only are you throwing great right now, but the guys behind you have complete confidence in you. When you're up there, they seem to play a lot better.' He kind of acknowledged that," Archer said. "They look to him to be a leader and he's really stepped up and become that."

Burdette and Brian Dale led the Clovers with three hits each. Skiles added a pair of singles.

Jeremy Gray had three hits for Monrovia, followed by Reeves and Benefiel with two each.

Next game -- Cloverdale will battle the winner of Tri-West and Speedway at 10 a.m. Monday at North Putnam.