BY STEVE FIELDS, For the Banner Graphic 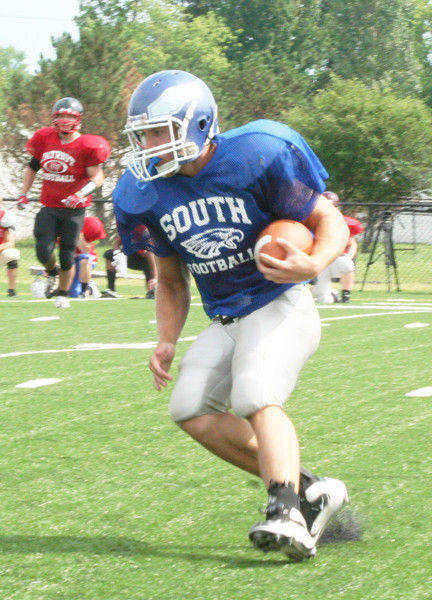 But Putnam County players and coaches on the North and South, on offense and defense stood out, and it started before the first snap of the game.

North Putnam football coach Greg Barrett, who came up with the idea for the game, was shocked Friday night when he was inducted into the Wabash Valley Football Hall of Fame with former South Vermillion coach Brent Anderson and former Sullivan coach Otto Clements.

"It was a pretty exciting moment. I was shocked. I wasn't expecting it," Barrett said.

"They said we had another special recognition. The next thing you know they're talking about me. It was a great honor," Barrett said.

Putnam County All-Stars also earned a share of the $20,000 in scholarships awarded at the game.

North Putnam's Darr Boruff and South Putnam's Derek Dean won the WVFCA/Pete Varda Hall of Fame Scholarship. Voted on by the team before the game, Boruff and Dean each received a $1,500 scholarship.

The scholarship will help Boruff at Greenville College in Greenville, Ill.

"I was very happy I got it. Thankful," Bourff said.

Boruff's name was called time and time again, as North's defense held South to 13 points and 207 yards of total offense.

"I just used what got me here in the first place, which was my speed and strength. I used that to my advantage over the slower guards and slower tackles and I was able to use quickness to get tackles today and help our team win," Boruff said.

The game gave players and coaches one last week together before going their separate ways.

"It was a special week. I was lucky enough to have my head coach (Troy Burgess) come here and coach us. I thought in the fall I was done with him, but I had to come. It's been a great week. All the guys here were a lot of fun. Everybody meshed real well. We had a lot of fun," South Putnam's Dean said, who is bound for Wabash College.

"A lot of things made this a special week. The bottom line was being able to have these six seniors again for another week of football made it very special. It was fun having them here and being able to do things with them again, under a different atmosphere, obviously," South Putnam's Burgess said.

"I didn't even know they gave scholarships, so I am definitely excited about that," Cash said.

Cash, who will play at Anderson University, scored both South touchdowns and rushed for 101 yards.

"I don't ever like losing, but it was one of the (most) fun football games I've ever played," Cash said.

There were 14 Putnam County players in the game from North Putnam, South Putnam Cloverdale and Greencastle.

In addition to Boruff and coach Barrett, North Putnam was represented by Shawn Diebold, Brock Jones, Kyle Adams and Tyler Osborn on the North All-Star team.

Greencastle's Hickam led the South All-Stars with three catches for 24 yards, ran the ball five times for 29 yards and returned a kickoff 27 yards.

"It was good blocking on those plays, but it was good. It was fun," Hickam said.

Burgess, the South's head coach, said his team turned the ball over too many times -- lost two fumbles and one pass interception.

"I think it was a combination of we couldn't stop them, and two, we just gave them too many short fields. In an all-star game, these kids are good. You got a (NCAA) division one quarterback (Marshall's Duncan) and you got another (good quarterback in) Walsh. You don't give them a short field and not expect them to put some points on the board. Offensively, we put the (ball) on the carpet too much early," Burgess said.

North Putnam's Diebold made one of the two interceptions for the North defense that led to a touchdown. Diebold picked off a Brandon Bailey (Olney, Ill.) pass and returned it 26 yards. The touchdown gave North a 34-6 lead.

"Our defense was phenomenal. We worked on defense all week this week. We just did great tonight. I was thinking don't drop it and watch out for the kill shot (tackle)," Diebold said.

The North All-Stars punted just once, with North Putnam's Jones booming away a 38-yard kick.

Now the players move on the college and the coaches returned to their respective schools with an eye toward practice in August.