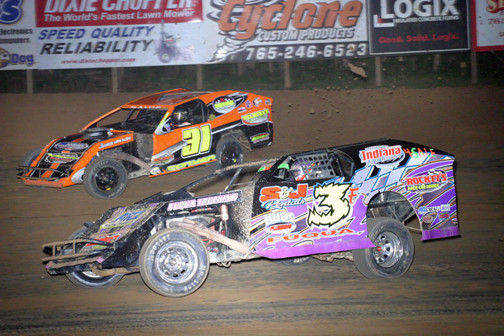 Craig Conyer and Rob Fuqua do battle for the top spot in the UMP Modified feature at Lincoln Park Speedway on Saturday night. Conyer got his first win in six years, edging Clint DeMoss.

PUTNAMVILLE -- Lincoln Park Speedway has quickly garnered a reputation for thrilling, tight racing this season and Saturday was no different, as 113 cars were in the pits with each driver in search of the checkered flag at the end of the evening.

One driver who has found his way to victory lane a few times already is Dickie Gaines, who came into the weekend with three wins to his credit at LPS.

On Saturday night, Gaines became the latest hot shoe to win a sprint car battle at the finish line and it came at the expense of Bub Cummings, who once more, came up just short as the checkers waved.

Cummings lost out on a photo finish several weeks earlier to Russ Harper and on Saturday, it was Gaines who snatched the victory, making a pass off turn four of the final lap and claiming the win by a couple of car lengths.

Forty-two sprint cars were on hand this weekend, with Cummings and Gaines each winning their heat races. Billy Puterbaugh Jr. added a win as well, along with A.J. Anderson and James Bradshaw.

Starting the A-main, Anderson and Bradshaw were on the front row ahead of Puterbaugh and Gaines with Cummings taking the green from the fifth spot. 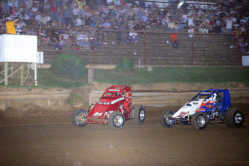 Dickie Gaines (No. 21) is able to outrace Bub Cummings (No. 71) to the checkered flag to pick up his fourth feature win at Lincoln Park Speedway on Saturday.

Anderson took the green and the lead from the start with Puterbaugh in second, but Cummings quickly edged past Gaines after a brief side-by-side fight and dove low into turn three for the second spot and shortly afterwards, nabbed the point from Anderson.

Cummings was able to build a small lead as Puterbaugh slipped into second followed by Seth Parker on the top along with Gaines.

A caution re-set the field near the halfway point, but Cummings got a good restart and took the bottom groove to maintain the lead as Puterbaugh and Gaines rocketed around the cushion on top. Parker and Ethan Barrow made up the rest of the top-five as Kent Christian continued to move up from a 10th-place starting spot.

Cummings held onto the lead as Gaines charged into second and set his sights on his fourth win at LPS this year. With five laps remaining, Gaines had made his way into a side-by-side fight for the top spot with Cummings. Puterbaugh held onto the third spot as Christian slipped into fourth with two laps left.

Cummings stayed on the bottom as Gaines made his move on the top, with the white flag waving, the two were wheel-to-wheel through turns one and two. Down the backstretch, the two sprinters were locked together, seeking that little extra bit of momentum.

On this night, it was Gaines who found just enough bite off the cushion of turn four and edged Cummings to the finish line by 10 feet for his fourth win.

Puterbaugh, Christian and Barrow made up the top five, followed by Parker, Anderson, Bret Triplett, Brent Beauchamp and Kenny Carmichael Sr., who blasted through the field from a 19th starting spot.

In the UMP Modified division, Clint DeMoss has found his way to victory lane 14 times this season and is fifth in the nation in UMP points.

DeMoss was able to build a small lead at the start of the race before Hayden suffered a mechanical problem, which ended his evening prematurely.

DeMoss and Conyer stayed out front with Conyer working the top, chasing DeMoss, who worked the best on the bottom. Behind them, Josh Boller and Rob Fuqua chased the leaders as a three-way battle developed between Travis Shoulders, Carlos Bumgardner and Dan Lewellen.

Up front, DeMoss and Conyer were side-by-side as the laps ticked away before a late caution as Fuqua made contact with DeMoss in pursuit of second-place. 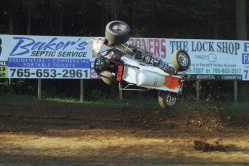 Kelley Deckard had a tough tumble during the first heat race of the night at Lincoln Park Speedway. Deckard's flip ended his evening, but he was uninjured in the crash.

On the re-start, Conyer was able to stay out front and held off DeMoss' chase for another win. Conyer claimed his first win in six years in the Jamestown Auto Parts, Wilbur's Dry Stripping, Hufford Racing Engines, Dri-Bar, RC Lawn Care-sponsored No. 31c.

In the UMP Super Stock division, Steve Peeden has quickly become the man to beat over the last month, coming in with back-to-back feature wins.

On Saturday, Peeden started outside of row two as Josh Burton and Slick Griffin were on the front row.

Burton led a couple of early laps before Kenny Carmichael Sr. took over the point as Peeden went low to grab the runner-up spot ahead of Griffin and Burton.

Carmichael and Peeden went door-to-door for several laps before Carmichael took over the top spot and was able to build a small lead with five laps remaining.

A caution brought Carmichael back to the field and on the re-start, Peeden pulled a slide job into turns three and four to take over the lead and wouldn't be caught. He grabbed his third straight win at Lincoln Park Speedway as Carmichael Sr. settled for second ahead of Kenny Carmichael Jr. Griffin was fourth ahead of Brett Smedley, Dan McCullough, Jacob Wright, Joe Starks, Dale Jeffery and Jamie Adams.

Shoulders was able to continue on to pick up the victory ahead of Walls, and Bryan made his way all the way back to third-place followed by Chad Nolte and Ron Wallen Sr. Bob Farris was sixth ahead of Kevin Kemp, Josh Fagg, Richard Watkins and Frank Cotton.

Next weekend will be the sixth annual Bomber Bash along with sprint cars, modifieds and super stocks.