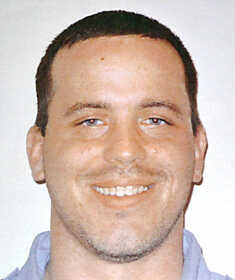 PUTNAMVILLE -- Detectives from the Criminal Investigation Division at the Indiana State Police Putnamville Post have completed a nearly one-week investigation into allegations that an employee of a local ambulance service inappropriately touched a female patient, then without authorization removed several pictures from the alleged victim's cell phone.

The investigation revealed the alleged acts occurred in Putnam County, and caused the issuance of a Putnam County arrest warrant for the employee.

Jordan was working as an emergency medical technician for Trans Care Ambulance Service in Terre Haute during the alleged events.

The investigation originated on July 12, when a 26-year-old female complained that during her transport from St. Vincent Clay Hospital in Brazil to St. Vincent Hospital in Indianapolis she was inappropriately touched in private areas of her body and personal photographs stored on her cell phone were sent to another person's cell phone without her authorization.

The woman alleged that Jordan was the lone Trans Care Ambulance employee attending to her in the medical service area of the ambulance, and that he performed the alleged events against her will during the trip just after noon on July 12.

Since the issuance of the warrant on Thursday, Indiana State Police detectives have been unable to locate Jordan and have reason to believe he has fled from Indiana. He may possibly be with his wife, Jamie Lea Jordan, 22.

ISP Detective Tony Guinn is the lead investigator. He was assisted by ISP Sergeant Troy Stanton and Detective Sam Stearley.

Anyone with information in this case is urged to contact the Indiana State Police at Putnamville at (812) 299-1151.