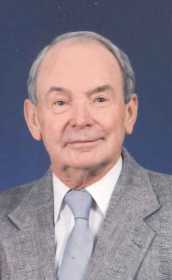 John was born on Nov. 14, 1923, in Parke County, IN, to Joe and Hazel (Gross) Thomas. He and his siblings were raised on the family farm in rural Rockville. He attended a one room grade school, Crossroads, before graduating as valedictorian from Rockville High School in 1942. He then enrolled at Indiana University, Bloomington, IN.

John's college education was interrupted in 1943 when he enlisted in the Army Air Corp and served as a gunnery instructor Sergeant. While stationed in Boise, Idaho in 1945 he met and married Jessie Sparks. They returned to Indiana where John resumed his education and later graduated with a degree in law. In 1948 he and his family moved to Brazil where John began his life-long career as an attorney and trial lawyer. In 1956 he was joined in his law practice by his brother Amos.

In 1966 John was elected for the first term of his 24 year service as a State Representative. During his tenure he served as House Speaker Pro-Tem; House Assistant Majority Leader; House Assistant Minority Leader; Midwest Region Chairman, National Chairman, Executive Committee of the Council of State Governments; Executive Committee of National Conference of Legislatures. Additionally, John received numerous legislative honors including: Service Award for the Handicapped, Service to Older Americans and Older Hoosiers Award, Several State Legislator of the Year Awards, and National Legislator of the Year Award. While serving as legislator John sponsored hundreds of high school students as Legislative Pages to the State House, providing transportation and dinner.

John's tremendous interest in the character development and citizenship of youth led him to service in Boy Scouts of America. John served as President of the Wabash Valley Council as well as Council Commissioner. He was the longest serving member of their Board of Directors. Not only did he hold additional local, state and national offices in Boy Scouts but he also received such coveted awards as Silver Beaver and Silver Antelope. Combining his devotion to scouting and the United Methodist Church he presided over the National Association of United Methodist Scouter's (NAUMS).

John joined the Brazil Rotary Club in 1948 maintaining perfect attendance until becoming ill in 2008. He served as the Club President from 1960 to 1961 and the District Governor of District 6580 from 1993 -- 1994. John was especially proud of initiating and sponsoring the annual Fourth of July sack races held during the carnival at Forrest Park.

He was the recipient of the Paul Harris award in 1978.

His community activities include charter member and director of the Brazil Junior Chamber of Commerce, Brazil Elks, Director of the Brazil Chamber of Commerce, YMCA Board of Directors, Jaycees Outstanding Young Man, Advisory Board of Vincennes University, , Sagamore of the Wabash, Honorary Doctor of Humane Letters -- DePauw University, Trustee -- University of Indianapolis, Charter member and Director of Clay County United Way, and Legislative Advisor to the U.S. Trade Representative Carla Hills.

John was an avid traveler. In 1965 he embarked on a world tour with his family which included more than 30 countries. He delighted in taking his children and grandchildren with him on these adventures. In his lifetime he visited 6 continents and nearly 50 countries. He especially enjoyed sharing his travelogues with others.

After the dissolution of his first marriage he moved to Sun City West. While there he met and married Marion Ojard. They enjoyed traveling, entertaining family and friends in their home, and attending spring training baseball games.

He took pleasure in vegetable gardening, making gooseberry pies and canning grape jelly. He also enjoyed mushroom hunting, fishing -- especially in the mountains of Idaho and Alaska, Cubs Baseball, and IU Basketball as well as spending time serving others.

He was preceded in death by his parents, a brother Noel Thomas, nephew Dr. Mark Thomas, and sister-in-law Mary Thomas.

Services for John will be at the Brazil First United Methodist Church Monday, July 26, 2010 at 11:00am with Rev. Robert Ostermeier officiating. Burial will follow at Clearview Cemetery. Visitation will be at French Funeral Home, Sunday from 3-8pm with Masonic services being held at 7:30pm. Memorial contributions may be made to the Boy Scouts of America. Visit www.frenchfuneralhome.com to light a candle in his memory.