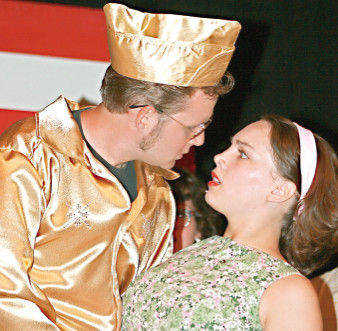 Conrad Birdie, portrayed by T.J. Tincher, left, shares a close moment with Kim MacAfee, portrayed by Rebecca Whitcomb, during a performance of "Bye Bye Birdie" at the Putnam County Playhouse. The production opens Thursday, with additional performances set for Friday, Saturday and Aug. 18-21. For a story about the upcoming production, see page 2. Banner Graphic/JAMIE BARRAND

What happens when America's most popular rock and roll singer is drafted into the army? Well, if it's the early 1960s it's turned into a musical. Putnam County Playhouse presents Bye Bye Birdie with performances Thursday through Saturday and August 18-21. All tickets are $9 and can be reserved by calling the box office after 5 p.m. The box office will open daily during performance weeks from 5 to 7 p.m. The box office can be reached by telephoning 765-653-5880. The musical is sponsored in part by First National Bank.

The musical is directed by Lita Sandy who is also in charge of choreography for the show. Musical and vocal director is Patty Scott, who is also the pianist for the production. Also working in the pit are Lynne Tweedie on keyboards, Michael McClaine on percussion, Drew Brattain on bass guitar, and Vivian Whitaker on saxophone/clarinet.

"Bye Bye Birdie" stars PCPH veterans Brad Sandy and Meghan Armitage in the roles created on the Broadway stage by Dick Van Dyke and Chita Rivera. As Albert and Rosie, the duo are in charge of giving Conrad Birdie (TJ Tincher) a big send off on the then popular Ed Sullivan variety television show. Their big idea is have the singer kiss one lucky fan just before he is shipped off. They are also hoping to get married, but not if Albert's mother (Kim Brattain) has her way.

Kim McAfee (Rebecca Whitcomb) is chosen as that fan. The uproar created in her home includes her parents (Krista Harrison and Scott Armitage), her younger brother Randolph (Thomas Whitcomb), and her steady boyfriend Hugo (Elijah Brattain).

Chris Wurster and Andrea Sweet are featured as the Mayor of Sweet Apple and his wife. Performers playing other roles include Jessica Walter, Alex Asbell, Lori Briones, Dustin Bond, and Joe Lippard.

Matt McClaine is assisting on sound. Stage manager is Jessica Masner. Tim Peyton and Noah Cox are working on the stage crew. Brenda McClaine is running the light board.

Costumes are by Pat Armitage and Sarah Bond with assistance from Sophia Spencer. Special scenic designs were created by Linda Gjesvold and Sarah McClaine.

The Tony-award winning show was first produced on Broadway in 1960. It was directed by Gower Champion. Music for Bye Bye Birdie is by Charles Strouse with lyrics by Lee Adams and a book by Michael Stewart.