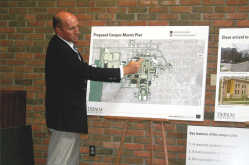 GREENCASTLE -- DePauw president Dr. Brian Casey was on hand at Tuesday's meeting of the Greencastle Common Council to share some work the university has been doing on strategic planning.

While the plan entails numerous points which will likely take years to implement, the most important factor to Tuesday's audience is the campus's connection to the community.

Casey said DePauw has the fewest signs of any campus with which he's been associated. This doesn't exactly make it a welcoming place.

One proposed feature of the plan is giving the campus an official entrance point. Casey said he thought the most natural point would be on Anderson Street, entering from the east off of U.S. 231.

"We believe that Anderson Street is probably our best bet to create an entrance point to campus. Most colleges have an arrival point that leads to its signature building," Casey said.

Arriving on campus face to face with East College would certainly accomplish this end.

He also shared his thoughts on connecting the school more to downtown Greencastle. He pointed out that the three largest buildings on campus -- Lilly Center, Green Center and Julian Math and Science Center -- all indicate a southward movement of campus.

He said he would like to see a reversal of this trend by opening up the campus to the north.

"Is there something we can do that says, 'There's a reason to come north?'" he said.

Most of all, Casey emphasized community, both in DePauw's relationship with the community and in promoting its own community.

He added that at a liberal arts school, it should be impossible to be anonymous. Campus should be designed so that people run into each other.

Casey also emphasized that the university is not rushing into any plans, simply trying to develop a plan for the campus's future.

"This will not all happen this year. This is a long, long-term plan," he said.

The council approved a resolution to apply for a façade planning grant. If the city were to receive the grant, downtown businesses would be eligible for grant money for property improvements.

"I think this is desperately needed. For some time now, we've needed to address the downtown area," Councilor Phyllis Rokicki said.

Just before the meeting's conclusion, the council addressed the matter of renaming Warren Street.

As discussed at the July meeting, the city has both a Warren Drive and a Warren Street. GPS mixups have led truck drivers to show up on Warren Street, a small street off of Beveridge Street on which only one family lives., looking for Heartland Automotive.

Although the city has taken proposals for the name change since last month's meeting, they also heard from the family living on the street.

Wes Green, one of the residents, requested the name be changed to Green Acre Lane.

"We like the name Green Acre Lane because we would have the word 'Green' in every line of our address," Green said.

After a short discussion, the council voted unanimously in favor of the name change to Green Acre Lane.