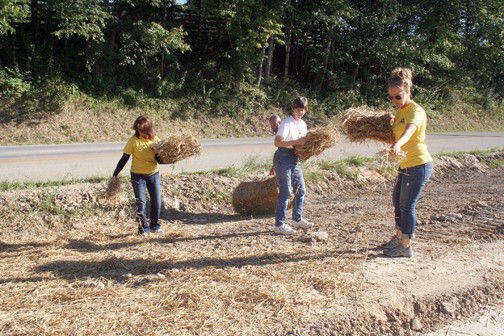 As part of Friday's United Way Day of Caring, Tammy Grundlock, Ed Neumann, Gayle Hansen and Cecily Case spread straw over newly planted grass seed along the Albin Pond Trail. Assistance on the trail project was one of a number of volunteer opportunities for United Way volunteers as part of the organization's annual kickoff event.

GREENCASTLE -- The United Way of Putnam County celebrated the kick-off of its 2010-11 campaign Friday with the organization's annual breakfast, held at the Inn at DePauw.

All three conducted early employee campaigns. Between its Greencastle store, distribution and transportation facility, Wal-Mart has already donated $44,000 (counting a dollar-for-dollar match to employee contributions by the company). TCU has kicked in just over $3,000, while Old National has donated over $1,400 so far.

"We're off to a good start," English said. "We've got some work to do, but we've always got work to do."

English lauded the efforts of Hannah Ames, who served over the summer as an intern for the United Way of Putnam County. Ames has already returned to her studies at Purdue, where she is a senior, but came back to attend and assist with Friday's event.

"None of this couldn't have happened without her," English said.

Keynote speaker for the event was Bob Hammel, who worked for more than 30 years as the sports editor of the Bloomington Herald-Times and is the author of more than 11 books. 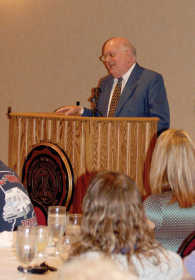 Retired Bloomington Herald-Times sports editor Bob Hammel was keynote speaker for the United Way breakfast. Hammel shared his memories of his years at the sports desk, but also of his time, as a young sports editor in Huntington, he served as the publicity chair of a United Way drive. He commended those gathered for their compassion in being part of the United Way.

United Way is an organization close to Hammel's heart. He said he has supported campaigns at his place of employment, and as a 23-year-old served as the publicity chair for the United Way of Huntington.

"Of all the organizations I've been involved in, this is the one that has really taught me a lot," he said. "When I think about what United Way does, I think, 'There before the grace of God go I.' I could have very easily lost a job, been faced with a devastating illness or gone through a divorce and needed the help of the United Way agencies."

Hammel said in his estimation, the basic tenet of United Way was very simple.

"It's showing compassion for those who are in need," he said. "All of you are sharing in this opportunity to show that compassion and put it to work."

Hammel showed the crowd a small statuette he had received for participating in a United Way in 1960.

"I am a collector of lots of things, but the reason I've kept this around is because it meant something," he said.

The breakfast was followed by the United Way's annual Day of Caring. Groups of volunteers were sent all over the county to complete community service projects.