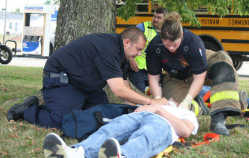 GREENCASTLE -- A bus accident late Monday morning resulted in no substantial damage, but sent 10 North Putnam High School students to the hospital as a precautionary measure.

The accident occurred at 11:33 a.m. on Indianapolis Road near the intersection with Fifth Street. The street was undergoing paving at the time, leaving it open to only one-way traffic.

Shirl Davis was driving a GMC Jimmy westbound, waiting for the flagger. Kyla Dallacosta, driving the school bus owned by North Putnam Schools, was behind the Davis vehicle.

Upon getting the signal to proceed, both vehicles began traveling westbound in the center lane. However, Dallacosta moved to the right lane when she believed Davis was preparing to make a left-hand turn.

Instead, Davis attempted to turn to the right in front of the bus. Dallacosta slowed the bus enough to avoid major damage, but still struck the GMC.

The bus was en route back to North Putnam from Area 30. Ten of the students were transported to Putnam County Hospital either with minor injuries or as a precaution. There appeared to be no major injuries.

Students not transported to PCH were taken back to the high school on another bus.