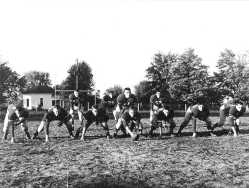 Last year, Denny Bridges established the John and Bob Bridges Fund to honor his father and uncle, John and Bob Bridges, who played football for Greencastle High School in the 1950s. The fund is intended to purchase jerseys for GHS football players with their names on the back. Members of the 1955 team pictured above are, front from left, end Chuck Beiber, tackle Dave Fritzsinger, guard Tom Daugherty, center Don Austin, guard Fred Unsworth, tackle John Bridges, end Jim Hughes; middle, quarterback Jim Braden; back, halfback Chuck Saathoff, fullback Bob Bridges and halfback Charlie Pingleton. Anyone with corrections to this list may contact Jared Jernagan at 653-5151 ext. 21 or jjernagan@bannergraphic.com. Contributed photo

GREENCASTLE -- When Charles "Denny" Bridges wanted a way to memorialize his father and uncle, he had to look no farther than the Greencastle football team.

Denny's father John and uncle Bob Bridges played football together for Greencastle High School in the 1950s. Last year, he established the John and Bob Bridges Fund through the Putnam County Community Foundation. The new endowment will provide financial support for the high school in buying football jerseys for the players with their names on the back.

"I'm doing this to memorialize my dad and my uncle, who are both deceased. They both just loved football, and they were wonderful men," Bridges said. "They were pretty good football players in their day."

Besides memorializing his dad and uncle, though, Bridges also wanted to do something nice for the GHS athletes. Putting the names on the jerseys will give the players an opportunity many kids at small high schools do not get.

"The reason I want to put the names on the jerseys is because frequently the bigger schools do that, and when kids are in high school, that's a big thing," Bridges said. "What I am going to do is allow the graduating seniors to buy them at a much reduced cost. Then that money would go back in the endowment."

With the personalized jersey, the players would then have a memento of their playing days.

Greencastle athletic director Scott Knapp expressed his appreciation for what Bridges is doing and looks forward to when the plan comes to fruition. He said this sort of community support is what he has seen since coming to Greencastle.

"One thing I will say about Greencastle is that they are some of the most supportive fans, parents, people that I've ever been around. I'm not just saying that. I've been at two other schools and seen other schools, and like I told Coach Davis when we interviewed him, we could be 1-9 or 9-1, and we'll still fill the stands. We have good parents that are supportive of our youth and of their kids," Knapp said.

"It's always nice to have support, whether it be for something like this or just parents making sandwiches for after the game. It's equally appreciated," he added.

Elaine Peck, executive director of the community foundation, said she is encouraging people to support public schools in new and creative ways.

"The downturn in the economy has caused schools to lose operating revenue," Peck said. "If we want our schools to continue providing the same services to our children that we have grown to expect, we will have to find new ways to support them."

Contributions to the Fund should be made payable to the Putnam County Community Foundation with "Bridges Football Fund" in the memo, and mailed to 2 South Jackson St., Greencastle, IN 46135. Anyone may contribute to the fund to help the GHS football team reach new levels of achievement.

The community foundation staff is available to help donors make gifts of cash, stock, retirement assets, life insurance, bequests, real estate and other types of gifts to the fund.

The Putnam County Community Foundation administers more than 200 funds and endowments for donors, supporting a variety of charitable purposes. To learn more about this fund, how to make a contribution, or how to start a new fund, visit www.pcfoundation.org or contact Peck at 653-4978.