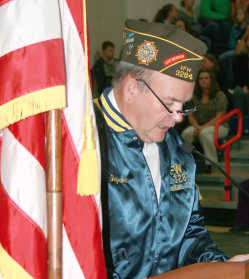 A Veterans Day program was held Thursday at North Putnam Middle School. The program consisted of performances by the North Putnam High School and Middle School bands and choirs, the presentation of colors by the Roachdale VFW post, the presentation of the flags of the U.S. Army, Coast Guard, Air Force, Marines and Navy and readings of essays by eighth grade students. Pictured, Roachdale VFW post member Raymond McCloud addresses the assembly of students. Banner Graphic/JAMIE BARRAND

ROACHDALE -- Veterans Day had a greater meaning this year than ever before for North Putnam Middle School eighth-grader Shannon Althouse -- her sister Gabby, 26, was deployed to Afghanistan last month.

"She's in the Air Force," Althouse said. "I was kind of scared at first, but she wasn't scared -- she was prepared for anything."

Althouse was one of many North Putnam Middle and High School students who took part in Veterans Day program held at the high school on Thursday.

Althouse said in her essay that service men and women were "where they are because that's where they want to be." She recounted the day her sister left for Afghanistan. 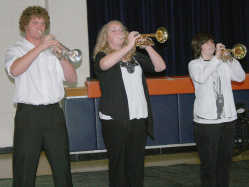 "We knew her plane was going to be laid over for eight hours in St. Louis," Althouse said. "So we took the opportunity to go see her before she left."

Althouse said she has taken a new view of the word "hero." While her friends often cite superheroes as theirs, Althouse said, her personal heroes are real people.

"Soldiers are the real heroes," she said.

Althouse has maintained contact with her sister fairly regularly since her departure.

"I talked to her on Facebook over the weekend," she said. "We're putting a care package together here at school for her."

Conlin said his grandfather and uncle were both in the U.S. Army in the 1950s, and that he has always been aware of the importance of veterans.

"I just wrote what was in my heart," he said of his essay. "Veteran's Day is a time to recognize what they all have done and to let them know we appreciate it. They've fought, served and died for us."

"I feel that our veterans need to be honored," he said. "They've given up a lot ... some of them have given up their lives ... and they didn't have to do it."

Also participating in the program were members of Roachdale Veterans of Foreign Wars Herschel E. Robbins Post No. 3284, who presented colors and gave speeches and a prayer.

The North Putnam band and choirs performed patriotic selections, and a ceremony in which flags from the U.S. Army, Coast Guard, Air Force, Marines and Navy were presented.