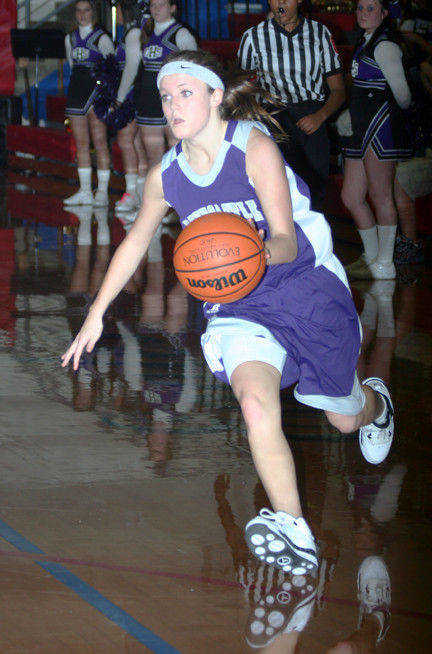 Greencastle point guard Alyssa Nichols pushed the ball up the court in the second half of Thursday's Putnam County Tournament opening game.

As with their game Tuesday, Greencastle jumped out to a quick lead behind the hot shooting of senior Mallory Miller. GHS led 11-0 to open the contest with eight points coming from Miller.

Although the Tiger Cubs looked strong out of the gate to most, head coach Bradley Key didn't see that start he would have liked.

"We talked about -- we still started a little flat," he said. "We have to do something about that and I'll look more into what we should do. Maybe I should give a good pump up speech, but we need to figure out a way to really come out -- the first two minutes we really couldn't get into a flow and then we did.

Coming into a game like this, Cloverdale is young and inexperienced and we're not," he added. "We have some good players. Mallory Miller is the two-time Putnam County Player of the Year and Chelsea and Alyssa -- we have some solid players, so we have to make sure we play our basketball."

Key said this was the type of game that if a team didn't keep its composure, it could get away from you in a hurry.

"It was kind of trap game because, really, you come out here and start playing a different kind of game and we did a good job of playing what we set out to do," he said. "We pushed the ball pretty well in the first half, Mallory got hot which is always fun to watch. I though we did a great job of blocking out and that's something the past couple of game where there were issues with that.

"We didn't get to practice a lot on it yesterday, but we talked about it and talked about it before the game of block out, block out and there were times where a shot would go up and I would watch the ball bounce one and for a coach that's what I love to see. Scoring's great, but committing to doing something you want to do is really what I like. We did a good job of that," he said.

Greencastle led 20-4 after one quarter of play and didn't let up after gaining the big lead. At one point, the Tiger Cubs went on a 14-0 run and ballooned its advantage to 41-9 entering the break.

After posting 20 points in the first quarter and 21 in the second, Greencastle put up 14 in the third quarter, but once again limited the Clovers to only four points.

Cloverdale entered the final quarter of play down 55-13, but they refused to give in or give up. The Clovers fought throughout the quarter and produced it largest output of the night in the final stanza.

On the other hand, Greencastle failed to break double digits in the final quarter, opting instead to focus on running its offense allowing time to fade away.

Asked if it's difficult for a team to maintain its focus while holding such a large lead, Key said his worry was aspects of the game his team has been working on eliminated would resurface.

"My big thing was, and I wrote a few things before the game, this is a game where we are bigger than them -- flat out," Key said. "Rayleigh (Amis), Taylor (Pruitt) and Chelsea (Samuels) are just bigger than them, so this would be a game to fall into old habits. It would be easy to just jump after a rebound a get it and you might get it. If you're Alyssa, it would be easy to just push it and weave in and out of traffic, but it may not work when you're playing a bigger, stronger, faster team. So we wanted to make sure we didn't fall into those old habits.

"That's what we tried to focus on along with the rebounding, along with making the good play. And then when we do happen to get where we want to in a game, we wanted to work on making sure we could run our offense and we got to that. The start of the fourth quarter I put the starters back in and I said we're going to run it until we get our lay-up and we did. We ran it successfully," he said.

Miller led all scorers with 23 points, followed by Pruitt and Samuels with 10 each.