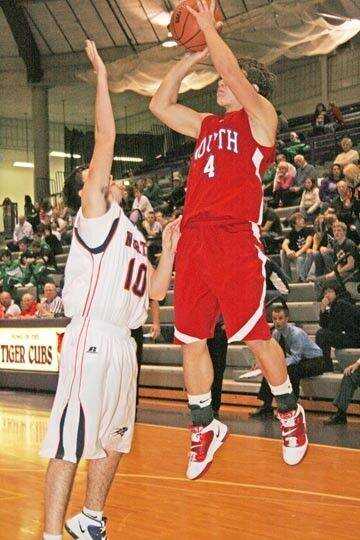 GREENCASTLE -- South Putnam's boys' team came into their Friday night tussle with Cascade looking for win number one on the season. At the same time, the Cadets were also looking for their first win of the year.

Once the clock had hit zeroes, Cascade got to walk off celebrating for the first time this year as they held off the hosts 46-34.

Neither side lit up the scoreboard in the first half and, in particular, the first quarter as both teams struggled along offensively to a 4-all stalemate after one quarter.

The game began to spring to life in the second quarter as Cascade was able to force multiple Eagle turnovers and several quick lay-ups to grab a five-point lead heading into halftime at 19-14.

With the contest finely poised, neither side made a move in the third quarter as both teams scored 15 points apiece to cancel one another out.

Though neither side was able to make headway, the excitement in the room from both fan bases never wavered.

The Eagles were able to get the score as close as four points twice, but, at 36-32 and with about 3:00 left in the game, the shots stopped falling and Cascade was able to knock down free throws and a couple of extra baskets to steal away the contest from the hosts.

"I thought we did a lot of good things defensively," he said. "We didn't put a whole game together shooting, taking care of the ball and rebounding. We had 15 turnovers in the first half, more than we'd been averaging for a game. We came out in the second half and only had five, right where we should be.

"We gave up eight offensive rebounds in the first half," Elliott continued. "Second half, we only gave up three, so we made some adjustments, the kids adjusted. We came out at halftime and scored fifteen points in the third quarter. It was a tight third quarter.

Elliott said he thought his team began to force some shots late in the game.

"Then there was a point at about 3:00 with the score 36-32 that we took some questionable shots offensively," Elliott said. "The pressure got to us a little bit and hopefully, we prepare ourselves next time where we're in a game to play great defense and put things together offensively and try to get the win.

"There were a lot of positives tonight. We did a lot of good things to win the game except execute down at the end," he added.

The Eagles get little down time as they face Southmont tonight. The Mounties have won the last three meetings but have only played twice and lost both games so far.

Elliot was encouraged by the team's effort but at some point wants to see the effort translate to wins.

"We need to come out and play defensively the same way we did tonight and offensively take care of the ball and execute what we need to do at the end. That's really all there is to it. It's basically what we need to do," Elliott said. "We gave a lot of effort. We're tired of moral victories. They start wearing on you after awhile if you don't get the victory in the victory column. We're going to come out, we're going to compete and we're just going to try to get better and do the things that we can to win the game."