Hutcheson, Haussin combine for 40 in GHS win over Clovers

By ANDY BARRAND For the Banner Graphic 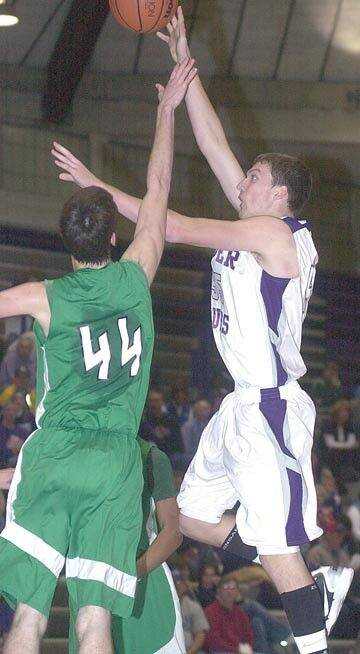 GREENCASTLE -- Greencastle junior Brad Haussin caught fire during the second half of Friday night's game against Cloverdale, helping the Tiger Cubs put away the Clovers 58-46 to open conference play.

Haussin hit five three-pointers in the second half and a field goal for 17 of his 19 points on the night.

"Brad was huge -- it seemed like every one of his three-pointers came at a time when we needed them," said Greencastle coach Troy Greenlee. "Everytime Cloverdale made a run he hit a three."

Going into Friday night's game, Greenlee knew it was going to be a physical match-up. Just last week the two teams met in the opening round of the county tournament.

"We knew that they would come out and be aggressive," said Greenlee. "They outscored us in the second half of last week's game. We knew that we were in for a fight."

The Clovers kept it close through the first half, only trailing by six at halftime. Going into the second quarter the Clovers held a lead at 14-13.

Greencastle outscored the Clovers though in the second quarter 15-8 to take the lead. The six-point halftime margin was the closest that Cloverdale got in the second half.

"We did a good job possession to possession," said Greenlee. "The guys held their poise throughout the game."

Leading the way for the Tiger Cubs was junior Nick Hutcheson with 21 on the night. He was followed by Haussin with his 19.

Greenlee said Hutcheson's inside play helped Haussin get a number of open looks from beyond the arc.

Despite the loss, Cloverdale coach Pat Rady said that he was proud of his team and the adjustments they made throughout the night. He complimented Greencastle on their great inside-outside game.

"They are going to win a lot of games," said Rady.

The leading scorer for the Clovers was Jordan Hayden with 13 points.

As the season moves on, Greenlee said his team must continue to work on their defense.

"We didn't have a sense of urgency with our 1-3-1 defense tonight," said Greenlee. "The 2-3 zone worked well though.We need to be able to play both of them well throughout the game and be able to switch them at any time."

Greencastle moves to 3-1 on the year with the win, and will face Sullivan at home tonight.

Cloverdale is now 2-3 on the season.