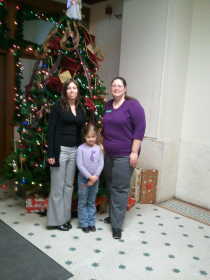 It's a claim rendered essentially meaningless by the millions and millions of people who might make it.

However, when Crystal Stonebraker says she loves Christmas, she's put in the time to prove it. Not associated with any organization, the volunteer has put in countless hours to organize today's Putnam County Christmas Parade that will end with Santa Claus visiting the Putnam County Courthouse.

"I love Christmas. I wanted it called a Christmas parade, not a holiday parade, as in putting Christ back into Christmas. That was a huge thing," Stonebraker said.

In addition to earlier organizational work, she said she has worked on the event pretty much every day over the last month. She has balanced work on the parade with life as a mother of two.

On Wednesday alone, she spent 12 hours decorating the courthouse for Santa's visit.

Stonebraker's efforts will come to fruition today, when the parade begins at 3 p.m. at Dairy Castle. It will run to the Putnam County Courthouse.

Santa's Workshop will be set up on the first floor of the courthouse after the parade's conclusion.

The parade will feature 46 different entrants, including the Girl Scouts, Boy Scouts, Grimace from McDonald's, the Aaron's dog, the Arby's oven mitt and Cowboys for Christ.

"And that's how Santa's going to ride in -- on a fire truck. We're really excited about that," she said.

Getting lots of people involved has been important, as she wants to keep a good thing going.

"I want to make this an annual thing," Stonebraker said. "The better a turnout we have, the more apt the city will be to let me do it each year. So I'm really hoping that everybody's going to come out and look at the parade, come into the event and enjoy it."

Kids will also have a warmer place to meet Santa this year than in years past. The workshop had formerly been set up in the courtyard between Mason's Jewelers and the Putnam County Convention and Visitors Bureau.

Problems with Mason's east wall made this impossible. County officials helped out with this problem, allowing the use of the courthouse.

"The board of commissioners let us do this. (County Planner) Kim Hyten is the one who suggested the courthouse. We were not going to have a place for Santa because of the issue," Stonebraker said.

Additionally, as a first-time parade organizer, Stonebraker had some expert help at what need to be done for traffic.

"Chief Tom Sutherlin has helped me out a lot with ideas, getting things blocked of and getting me with the right people," she said. "That has really helped."